Your go-to source for performance boating.
HomeIn the NewsCountdown to Miami: Skater Bringing 30-, 38- and 50-foot Cats 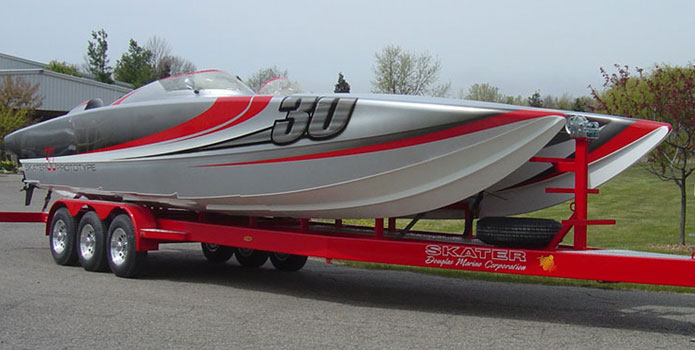 Peter Hledin, the founder and owner of Douglas Marine/Skater in Douglas, Mich., said he plans to display a broad range of catamarans during the 2013 Miami International Boat Show. Showcased in the Skater booth, which Hledin will work with Tommy Hofstetter and the crew at skaternation.net, will be a “Fat Boy” 30-footer with twin 1,000-plus-hp supercharged engines and Arneson ASD-7 drives, an open-cockpit 38-footer, a hardtop 38-footer and a 50-footer.

All three of the larger boats will have twin turbocharged Mercury Racing 1350 engines under their hatches.

While smaller cats dominated his company’s sales in late 2012 (Read the story), Hledin said that the new year has kicked off with orders for predominantly larger models.

“So far this year, at the high end of the market people still seem to be buying boats,” said Hledin. “The economy just seems to be so uncertain right now.”

It's Almost Here: 'Pegged 2 The Movie'