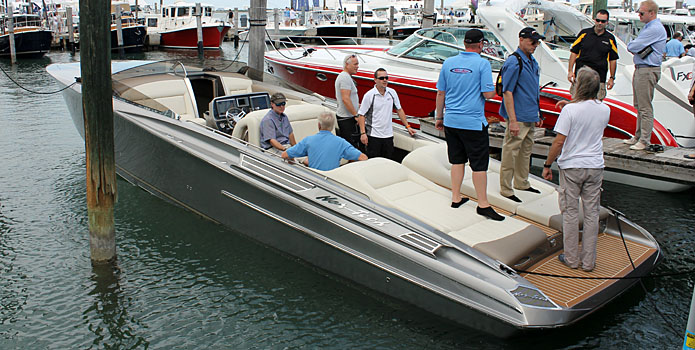 Last year, Nor-Tech had its 420 Monte Carlo with a pair of the new Mercury Racing 565 engines in the water for demo rides.

As usual Nor-Tech Hi-Performance Boats will be going all out for the Miami International Boat Show in February. Along with its outdoor display on the main drag right near the city hall entrance, Nor-Tech will have a handful of demo boats in the water, including a 340 Sport Open, the new 392 Super Fish, a Yanmar-powered 420 Monte Carlo and a 477 with twin Mercury Racing 1350s.

Terry Sobo, the company’s sales and marketing director, said the booth at the Miami Beach Convention Center is going to feature a few models from the company’s wildly successful center console lineup, including the all-new 344 GT, a 340 Sport and another 392 Super Fish.

“Although we’re not bringing anything groundbreaking, we’ll have a full armada at the show this year,” said Sobo, who added that sales have been strong recently in both the center console and performance markets. “We’re looking forward to showing off the boats and visiting with current and future customers.”

Checking In With BAM Marine