Your go-to source for performance boating.
HomeNew ProductsCountdown to Miami: Ilmor and Formula Team Up to Showcase MV8 570 Engines

Proving that good things are indeed worth waiting for, Ilmor Marine and Formula Boats have joined forces on a project to showcase a pair of Ilmor MV8 570 engines in a Formula 353 FAS3Tech sportboat during the 2013 Miami International Boat Show next month. Featuring state-of-the-art LS engine-platform architecture, the 570-hp, normally aspirated powerplants were previewed during the 2012 Miami event. They are, for the most part, heavily enhanced versions of the 7.4-liter, 454-cubic-inch engines that the Plymouth, Mich., engine builder has been supplying to MasterCraft for more than a year. 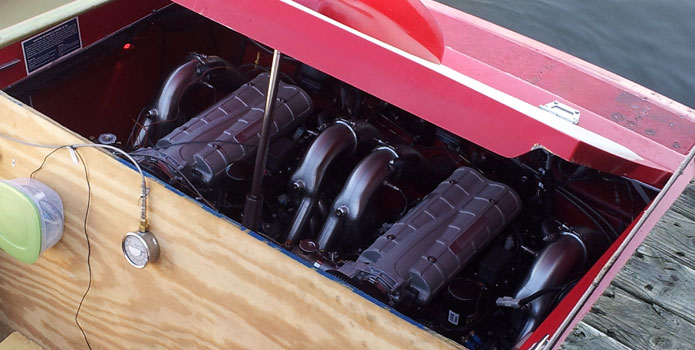 Shown in their original Eliminator V-bottom test bed, Ilmor’s MV8 570 engines will be showcased at the 2013 Miami International Boat Show in a 35-foot Formula sportboat.

“We have hundreds of the MasterCraft 7.4-liter engines in the field now, many with hundreds of hours on them,” said Jessica Gamarra, Ilmor’s sales and marketing director. “We launched the 522-hp 7.4-liter with MasterCraft as an engine that would surpass industry standards for performance, emissions and efficiency at that power output, and it has been extremely successful.

“It took a year for us to develop the 570-hp version of this engine and prove it is capable of providing higher output with the same levels of sustained durability,” she continued. “We envisioned this to be a groundbreaking engine platform with the latest technologies that would really merge together our recreational marine engines and high-performance engines.”

Ilmor will have two versions of the MV8 570—“entry-level” and “upgraded”—in its Miami Beach Convention Center exhibit. The difference between the packages are, according to Gamarra, cosmetics and price, and not power output. Appearance upgrade accessories for the entry-level models will also be available for aftermarket purchase. The engines will be displayed with drives from Ilmor’s long-term partners Teague Custom Marine and IMCO Marine. Engine packages will be available for order from Ilmor following the Miami show.

Twin 570-hp, 810-pound engines also will be featured in the 35-foot Formula stepped V-bottom with the company’s new-for-2013 “Stiletto” graphics package, along with IMCO drives with SCX upper units and SC lowers. Available for qualified demonstration rides by appointment through Formula representatives at the docks, the boat will be at the in-water portion of the event at Sea Isle Marina.

Ilmor enters the 2013 Miami event celebrating its 10th anniversary in the high-performance marine engine market, though the company has been designing, engineering and building automobile racing engines for nearly 30 years.

“Ten years ago when we came into the market and introduced our V-10 engine platform, it was about changing the way people think about high-performance marine engines,” Gamarra said. “With the MV8 570, we are once again finding a new way to bring everything we have learned from our championship racing side and apply it to the marine market. Like our race engines, all of Ilmor’s high-performance marine engines are still built by hand.”

Editor’s Note: Look for a complete feature on the development of the MV8 570 engine and the Formula project boat prior to the Miami event on speedonthewater.com, as well as a hands-on, first-drive feature during the show.