Your go-to source for performance boating.
HomeCommentaryCommentary: Your Chance to Give Back

Lately, we’ve had plenty of stories about the happenings in the Arizona performance-boating hot spot: Lake Havasu. Between the Lake Havasu Boat Show and the Desert Storm Poker Run, which occupy a full week at the end of April, there is a lot of news surrounding the events. 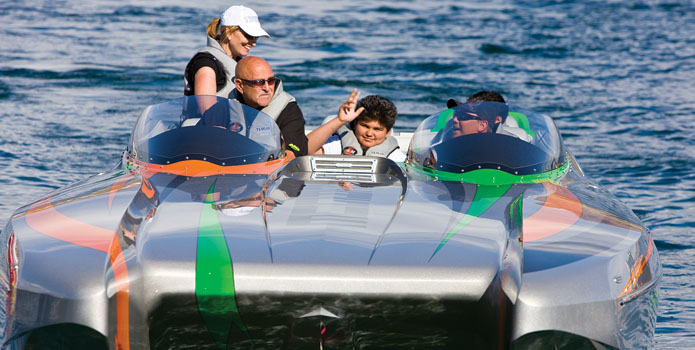 So rather than beat you over the head with how cool the event is and how much new hardware will be in attendance, let’s focus on the positives the week-long event brings to the community beyond the money-spending clientele visiting the lake, such as the charity rides and military heroes appreciation.

Each year, the Desert Storm Poker Run goes out of its way to honor the U.S. Armed Forces for protecting our freedom. In an extra effort to pay respect, organizer Jim Nichols and title sponsor Bob Teague of Teague Custom Marine, encourage any participants with an extra seat in their boat to welcome an active military member to their crew for the day.

I can attest, as I’ve been to many Desert Storm Poker Run award parties, that the military personnel are forever grateful for the rides they receive from welcoming boaters such as Mike Stevenson of Sedona, Ariz. If you have an extra seat for the run, definitely make the effort to host a military member—you’ll never forget the experience.

Another part of the Desert Storm festivities is the refreshed “Krusin’ for Kids” charity ride event that will be held on Wednesday, April 25. Not only does the event provide special-needs and under-privileged kids with an opportunity to ride in a powerboat, it also raises money for three deserving organizations: Havasu for Youth, New Horizons and The Civitan Foundation.

Included in the event, which takes place at the Nautical Beachfront Resort, are boat rides from 10 a.m. to 1 p.m., a pool party from 11 a.m. to 4 p.m., and a live and silent auction (with 100 percent of the proceeds being divided evenly between the three beneficiaries) at the Desert Storm Open House, which begins at 6:30 p.m. at OCM of Lake Havasu.

Christina Crane, Desert Storm’s volunteer coordinator, is looking for individuals or companies who would like to get involved either by donating money, product for the auctions or items for the gift bags that will be provided to the kids and each volunteer boat driver. Obviously, the more volunteer boat drivers the merrier. Email Christina Crane if you want to get involved or have any questions.

I’d be remiss if I didn’t mention a similar event, the annual Shore Dream for Kids, which is hosted by the New Jersey Performance Powerboat Club each July. For more info, check out the related story.