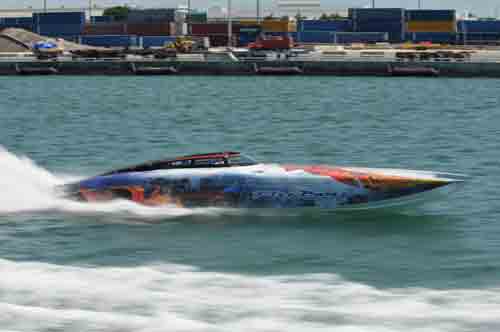 Last weekend’s Sunny Isles Offshore Challenge appeared to have it all: an endurance race from Miami to Bimini and back on Friday, a poker run on Saturday and an offshore race on Sunday.

Dennis Rodman. (OK, so I’m not sure the once-great Detroit Piston—you may recall that at one time Rodman had more rebounds than piercings—is that big a draw, but at least he livens things up.)

The only thing the Sunny Isles Offshore Challenge didn’t have? A good turnout. The Miami-Bimini run had nine registered boats, the poker run had seven and the offshore race had 23.

But that wasn’t the worst of it. Event organizers Brad Schoenwald and Larry Goldman were expecting 5,000 to 6,000 people at the Friday and Saturday night parties. Instead, despite television commercials, billboard advertising and being featured on the most popular morning radio show in South Florida, they got 1,200 to 1,500.

“I am still baffled by it,” said Schoenwald. “Miami just seemed dead and despite all the promotion we did, the people just didn’t come out.

“And with a couple of exceptions, we all didn’t get any support from the local high-performance marine community,” he added. “That baffles me, too, because ultimately the event benefits them.”

Still, while Schoenwald said that support from local businesses in the industry would have helped, that’s not the biggest challenge for the event. Timing is. He and Goldman realize that it needs to happen earlier in the year, sometime between late-April and early- to mid-May before the owners of seasonally kept performance boats move those boats back to the Northeast for summer.

Unfortunately, the solution is not as simple as just changing the dates. Schoenwald and Goldman have to consider conflicting events such as Desert Storm, arguably the largest go-fast boat happening in the world, and offshore races under various sanctioning bodies. And timing around those events, problematic as it can be, isn’t even their biggest hurdle.

“We have been tied to City of Sun Isles Beach annual birthday celebration dates,” said Schoenwald. “One third of our sponsorship money comes from the city. If we just change the dates, we lose that funding. We don’t have enough local industry support to replace it, so we need it.

“Plus, we have to contend with timing around environmental impact issues,” said Schoenwald. “No one has more power than the ‘turtle people.’”

Despite this year’s disappointing attendance numbers on all fronts, with the exception of “beach density,” Schoenwald said the show will go on next year and likely on a different—meaning earlier—weekend. He’s already working on it.