In August 2006, I covered the Big Cat Poker Run on the Sacramento River Delta in California for Powerboat magazine. I’d covered a bunch of poker runs in the 10-plus years I’d been with the magazine, but the Big Cat, which I’d written about once before, was one of my favorites. The maze of waterways that ran through rich farmland was intriguing, the people on the run—many from the nearby performance-boat-oriented community of Discovery Bay—were warm and friendly and, last but not least, the run was about an hour from my home in the suburbs of San Francisco. (When you travel to Florida on assignment six or so times a year, a close-to-home gig is a good thing now and then.)

To make the day even better, I was working with photographer Robert Brown, one of the funniest people I know in a kind of relentless, manic way. I knew we’d spend the better part of the sparkling, breezy morning trading Monty Python quotes through our headsets in the helicopter Powerboat had hired for the event as we watched the run unfold. 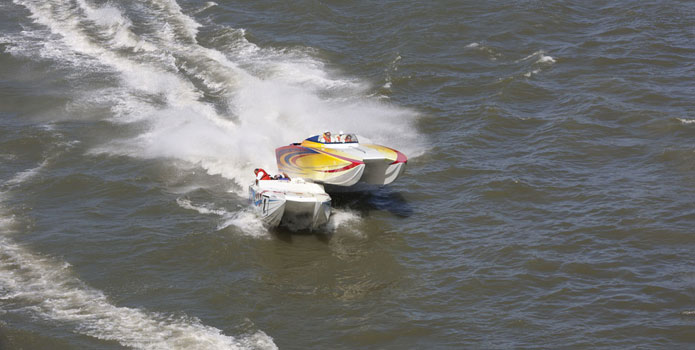 Covering a poker run is all about photography—the text, such as it is, exists to augment the images because, generally speaking, poker runs present no drama or conflict, the stuff of which compelling stories are made. So our plan was to run with the first boats as long as we could—150-plus-mph boats (that was fast in 2006) can outrun a helicopter limited to 110 mph with its rear doors off—then descend, slow to hover and “crab” sideways to give Brown a head-on perspective of the oncoming fleet.

And that’s exactly what we did until all hell broke loose right after the start.

What happened, how it happened, why it happened has been hashed—the accident pitted friend against friend and neighbor against neighbor in the Discovery Bay community, at least for awhile—and rehashed many times since it occurred six-and-a-half years ago, and I have no interest in rehashing it here. The chain-reaction crash happened at the start. People were injured, but no one was killed. 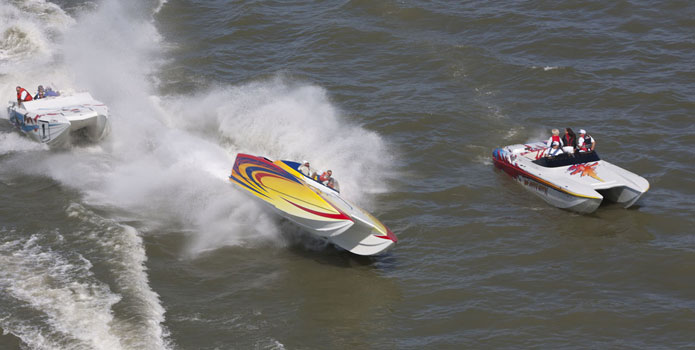 No one was killed, which, from my perspective in the helicopter, was a miracle. People were in the water with a fleet of go-fast boats closing on them at high speed. The combination of boats at idle in an accident scene and the onrushing fleet, its drivers unaware of the wrecks just ahead of them, could have been deadly. Given that scenario, it probably should have been deadly.

Instead, it just turned out to be a really bad day.

After hovering over one of the boats involved in an effort to prevent other boats from running into it, we flew back up the course to try to slow the fleet. We hovered low to the water and crabbed so the drivers and passengers in the boats could see us, and we gave them what we hoped they see as the slow-down sign—palms down, arms moving up and down. While a few people in the boats just waved backed, most seemed to get it. The fleet slowed and inched its way around the wrecks.

The fleet docked at the first stop. The run was over.

Until now, Brown’s photos from the incident had not been published—and if anyone had died that day they would have remained unpublished.

So why now? Why the buzz kill, one from an accident that happened more than six years ago, at the beginning of poker run season?

Because it is the beginning of poker run season, and with all the talk of being first to card stops and such in the discussion that sent me reeling down bad memory lane I’m pretty sure that a lot of people out there still don’t get it. These photos are a wake-up call for those who, for whatever reason, still seem to believe a poker run has anything to do with being “first” or “fastest.”

When things go bad during a poker run, they go bad quickly. From our perspective in the helicopter, the incident played out in nauseating slow motion. In reality, it took seconds. 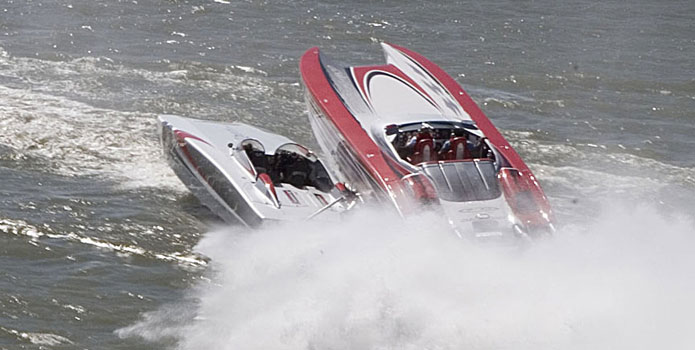 That no one died during the Big Cat Poker Run in 2006 is a miracle.

As I wrote above, that no one died during the 2006 Big Cat Poker Run was a miracle. But miracles rarely appear when you need them—that’s one reason why we call them miracles. You can’t count on them to keep you alive during a poker run. Instead, you have to count on your fellow operators to use good judgment, skill and—above all—caution.

Most of us are wide awake on this stuff. But for of us those who are not, it’s time to wake up.