Your go-to source for performance boating.
HomeCommentaryCommentary: True Believer in the Desert

Commentary: True Believer in the Desert

Commentary: True Believer in the Desert 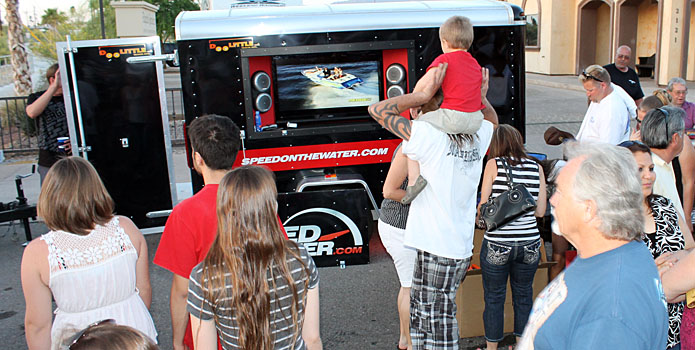 A thick New York accent cut through the vocal din in front of the Speedonthewater.com display at the Desert Storm Street Party in Lake Havasu City, Ariz., yesterday afternoon. You don’t expect to bump into a go-fast boat nut from New Jersey in Arizona—though maybe you should at an event as popular as Desert Storm—but damn if Dave Kopke, a 30-something Long Island guy who owns a 29-foot Hustler Rockit, wasn’t standing right in front of me and shaking my hand.

Of course I did. During a story I wrote about shadowing John Cosker of Mystic Powerboats at the 2013 Miami International Boat Show, I met Kopke and his friend Mike Moreno in the Concept booth. Kopke and his buddy came to the show “just to check out” all the new go-fast boats and hardware. They were in heaven.

Kopke was in heaven again, at least he seemed to be, in Lake Havasu—with one small disclaimer.

“It’s really hard to be here without my boat,” he said.

That’s because his trip to Desert Storm was part vacation, part reconnaissance mission. He flew to Phoenix, where he stores his Porsche for the winter at a friend’s house. Then he drove to Lake Havasu.

“Did you know that if get caught more than 25 mph over the speed limit in Arizona it’s a felony?” he asked. “You’re a criminal? It’s nuts.”

I didn’t have the heart to ask him if he knew that from experience. I did ask him why, aside from the opportunity to take a nice drive through the desert in a fine sportscar, he was here.

“I just love boats,” said Kopke, whose father owns a 39-foot Hustler. “I always have.”

So Kopke—a true believer if ever there was—came all the way from New Jersey, without his own pride and joy, just to check out the scene and the hardware at an event in Arizona. And he spent the day at the street party talking to fellow boat owners and vendors—last I saw him he was in deep discussion with Jessica Gamarra of Ilmor Marine. And today he’ll watch the poker run, maybe from the shore, or maybe from a someone’s boat, and wish he were out there.

Odds are good—make that great—he will be next year. He’s even planning to look at real estate in Lake Havasu City while he’s in town.

I wouldn’t bet against it.