Your go-to source for performance boating.
HomeCommentaryCommentary: Time is the Answer for Production Performance Boats

Commentary: Time is the Answer for Production Performance Boats

Commentary: Time is the Answer for Production Performance Boats 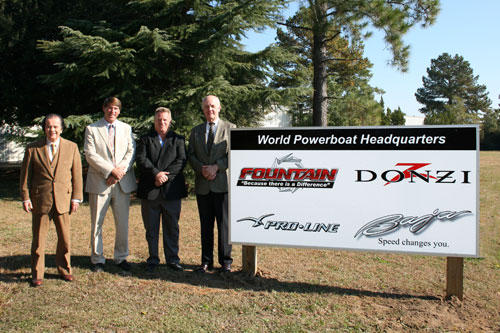 Reggie Fountain and members of the Liberty Associates and American Marine Holdings groups in better times.

Just for fun, let’s imagine there is no conflict in Washington, N.C. Let’s pretend management remains solidly in place and committed to the Fountain, Donzi and Baja brands, production is in full swing and there’s plenty of money in the bank.

Would any of the brands be thriving?

Four of five years ago, finding a new Fountain on the water was easy. Now, it’s an exercise in “Where’s Waldo?” Play the game with Baja and it gets even harder.

That’s not to say that custom go-fast boat companies have escaped unscathed. Once-dominant players including Eliminator and Dave’s Custom Boats have endured well-publicized struggles—and they’re the lucky ones. I known of one venerable company that has built three new boats in the last three years, which as bad as that seems beats going out of business, as several other builders have.

Custom builders east of the Mississippi have fared better, but not much. I talk with at least one of them every day, and the best word they have for the state of high-performance boat market, minus the expletives they use to modify it, is “challenging.”

The only “fix” is a healthy economy, and that’s going to take time. In the current economy, a high-volume production line business model simply doesn’t work for the go-fast powerboat market. It won’t work until people have more disposable income. It won’t work on either the dealer or consumer side until credit eases. The desire may well be there, but the demand and the ability to make it a reality is not.

That’s why “production” builders like Formula are building boats to order and why, as Formula’s chief executive officer, told me not long ago, “People are going to have to wait for their boats.”