Your go-to source for performance boating.
HomeCommentaryCommentary: The Spin on 190

Let’s talk about luck. Not skill or experience or talent, but good, old-fashioned, once-in-a-million-lifetimes luck. Winning the lottery. Missing a flight that never arrives at its destination. Finding the love of your life in a bar at last call.

Spinning out in a catamaran at 190 mph and walking away without a scratch. That kind of luck. 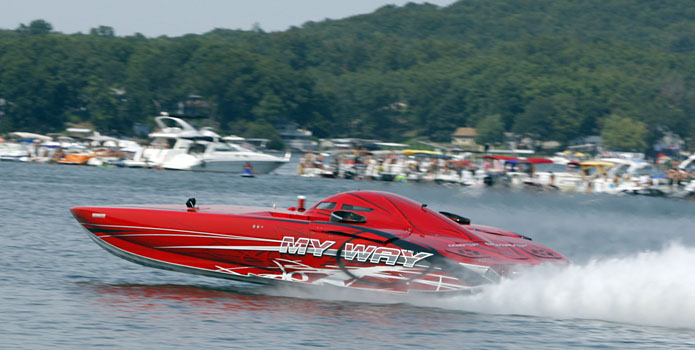 My Way earned the 2011 Lake of the Ozarks Top Gun trophy with a 208-mph top speed. Courtesy Robert Brown/RobertBrownPhotography.com

That last one is particularly mind-blowing. That My Way, a turbine-engine-powered pleasure catamaran that reportedly spun three times at 190 mph during the recent Thunder in the Bay Poker Run in Alexandria Bay, N.Y., didn’t hook and flip and or lift a sponson and become an aircraft minus landing gear could be the greatest piece of blind luck in the history of the high-performance powerboat world.

Unconfirmed reports had My Way roughly a mile-and-a-half ahead of the rest of the poker run fleet and making a long, sweeping turn when it spun. Also reported, but also unconfirmed, is that during the turn, the 50-foot Mystic catamaran had to turn a bit harder to avoid a personal watercraft.

To me, the details of what happened are irrelevant. What is relevant is the 400-pound gorilla sitting on my keyboard and in the back of more than a few minds.

What was the boat doing at that speed in such an uncontrolled environment, the kind where any vessel—a personal watercraft for example—could stray into its path?

I am not suggesting we set speed limits where they don’t already exist. I am not suggesting the folks who own the fastest pleasure boats in the world shouldn’t wring them out once in a while. But this time, maybe that time and place wasn’t quite right.

I also am not scolding anyone. Adults don’t need scolding. They simply deal with—and with any luck learn from—the consequences of their choices. In this case, the reported damage to the boat, given the circumstances of the incident, was light and again no one got hurt. But it wouldn’t be a stretch to imagine that everyone on board, especially the driver of the boat, is evaluating what happened, why it happened and how to keep it from happening again.

That everyone walked away without a scratch is pure, blind luck. To argue otherwise is silly. But to some degree we create our own luck—not in surviving a situation that basically is unsurvivable, but in putting ourselves in that position in the first place.

Commentary: Viscosity and You Is Worth a Watch