By the time most of the folks from the East Coast who are headed to the 2013 Miami International Boat Show leave for the event, the blizzard just finishing up its pounding of the area will be an unpleasant memory. But Mike Fiore and his crew at Outerlimits Offshore Powerboats in Bristol, R.I., are not most people going to the show. They are exhibitors and that means, because of their placement outside the Miami Convention Center, their move-in slot is this Monday at 9 a.m. 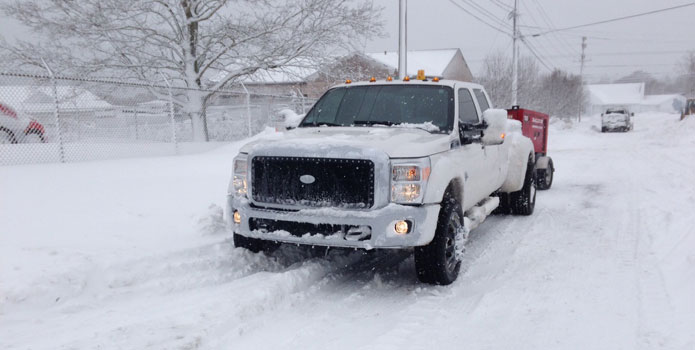 After Outelrimts lost power, Fiore had to head out in the storm and buy a generator.

Trouble is, most of the roads in and around Bristol are still closed, as are many of the major expressways that lead to the Sunshine State, some 24 hours of hard driving time away from the Outerlimits plant. The last two boats they intended to have in the show—the SV50 and the SV43 (Read the Powerboatnation.com story) should have left yesterday. Only one did—the 43-footer.

You’d think Fiore, who founded and owns the company, would have been in a justifiably ugly mood when he called me last night and this morning to tell me what was going on. On the contrary, he was pretty much howling with laugher during both conversations.

“I’ve beaten everything that’s been thrown at me in the past five years, but I just can’t beat the worst blizzard we’ve had since in 1978,” he said between fits of laughter. “But what are you going to do?

“Our power is out and my two upholstery guys had to sleep in the shop last night because they couldn’t get home,” he added. “I went out to get a generator and I had to drive through four-foot snow drifts. They ripped the freakin’ bumper off my truck!” 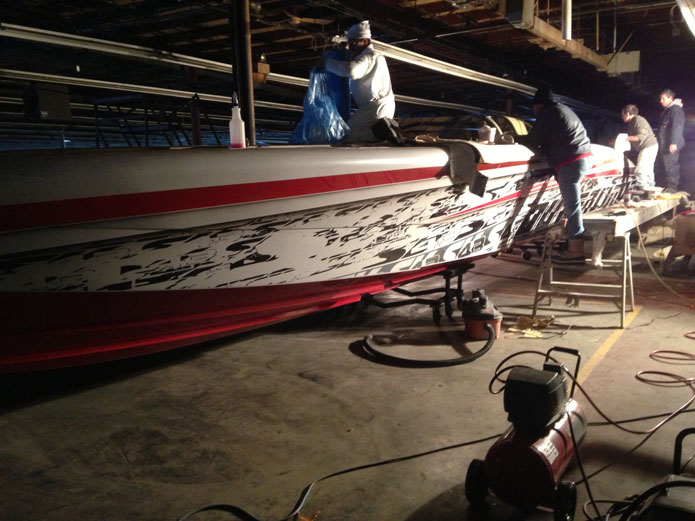 Buring the midnight oil at Outerlimits.

Like most high-performance powerboat companies displaying in Miami, Fiore and company had been burning the midnight oil to get the finishing touches on the models they planned to display. The SV29 was in Miami before the storm and the SV43 will make it in time—just barely. But the SV50 won’t arrive until Friday. Too late to be in the Outerlimits display, it will find a home at the Mercury Marine docks at Sea Isle Marina during the weekend.

You’d think that the National Marine Manufacturers Association, which puts on the event, would give Fiore a little wiggle room on his move-in time given the severe weather challenge he’s facing. You’d be wrong.

“I called to let them know what’s going on and they basically said that if we couldn’t be on time for our move in we wouldn’t be in the show,” said Fiore.

On one hand, I understand the NMMA’s position. Move in for a huge show like Miami—and there is no show like Miami—has to happen in sequence, as does move out. Once other builders have moved in and around an exhibit, getting a 50-footer into that exhibit would be next to impossible. On the other hand, without exhibitors there is no boat show. Tough call, any way you slice it.

“But what are you going to do?” he added, then fell into another fit of laughter.

Commentary: Another One Bites The Dust—Farewell Sportboat Ma...