Yesterday afternoon, I exchanged emails with Scott Porter, the chief executive officer of Formula Boats in Decatur, Ind. Most of our discussion had to do with Jason Johnson’s fine recent review of the Formula 353 FAS3Tech with the first pair of production MV8 570 engines from Ilmor Marine. If you’re a frequent visitor to speedonthewater.com, you know that Johnson and I have covered the 570-hp Ilmor engine project since its inception.

As we typically do, Porter and I eventually strayed from our immediate subject and moved on to other topics.

“Just came back from a great weekend at Lake of the Ozarks,” he wrote. “There was an invitation race sanctioned by OSS. Good for the sport and for the local economy. Hope they decide to do it again next year.” 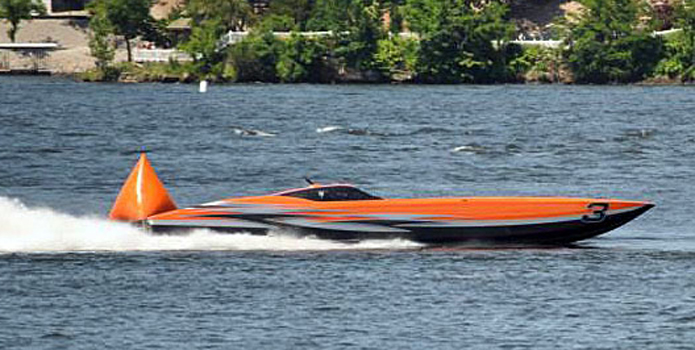 A crew very familiar with Lake of the Ozarks, Bob Bull and Randy Scism ran a flawless race in the 48-foot MTI CMS to win the “run-what-your-brung” PX class at last weekend’s inaugural Lake Race.

As it happens, we ran a story on that very event on Monday this week—and Johnson and I couldn’t agree more with Porter. The Lake of the Ozarks race didn’t draw a huge fleet or crowds on the order of those during the annual Lake of the Ozarks Shootout, but by most accounts the event had a solid start. Plus, the organizers actually paid out decent purses to the winners. That’s something that doesn’t happen every day in offshore racing.

A few hours before Porter and I started bouncing emails off one another, I caught up with Billy Frenz, the head honcho of the National Powerboat Association. As I write this, the opening party for the New York City Poker Run is just getting started—or at least the “pre-party” is probably getting started. (It is, after all, after 5 p.m. in New York City. On a Friday.) Like the recent Lake of the Ozarks Race, the New York City Poker Run—back from a four-year hiatus—won’t have a big fleet when it starts tomorrow at noon. Frenz had 20 registered boats as of yesterday, and he was hoping for 10 to 15 more today. Regardless, it could be the start of a resurrection for a once-popular event.

What do these two events have in common besides being part of the high-performance powerboat world? Both are good news for go-fast boat enthusiasts, and good news hasn’t been so easy to find during the past five years in the go-fast boat world. However lightly attended, a new offshore race and a resurrected poker run are very good signs for the industry and the consumers who support it.

The high-performance powerboat world has changed forever. I have not spoken to anyone in the industry—and I talk to industry folks every day—who believes otherwise. The days of production builders pumping out and selling 300 go-fast boats a year are long gone and not coming back for any number of reasons. But there is a market left, and contrary to the naysayers and the cynics I don’t believe it is dying.

Is the market still changing? Of course—just look at Nor-Tech’s success with center consoles and its mild surge in orders for go-fast V-bottoms and catamarans. Look at the record-setting sales of pre-owned boats in the past two years at Pier 57 Marine. Is the industry still challenging for every player left in the game? Damn straight it is.

But I don’t believe the go-fast powerboat world is dying. I see too many good signs. In fact, I saw at least two more just this week.