Last night’s inaugural Lake of the Ozarks Shootout Hall of Fame induction festivities celebrated the likes of David Scott—eight-winner of the Top Gun honor—and other well-known names in the high-performance powerboat world. That’s as it should be, for Scott and his fellow inductees Randy Scism of Marine Technology Inc., the late Bob Morgan and multi-time Top Gun champion Dave Callan played a huge role in putting the annual liquid-mile top-speed event on the go-fast boat map. To honor the stars who made the Shootout famous over the years is completely appropriate.

But the Shootout Hall of Fame election committee took a step—an equally brilliant and uncommon step—by inducting guys like founders Fran Steingrubey, John Page and John Suellentrop; firefighter Jeff Dorhauer, one of the chief organizers of the event for many years; volunteers Ron and Margie Frazier; and photographer George Denny, whose images have brought the event to go-fast boat lovers who have never attended, much less competed in it. 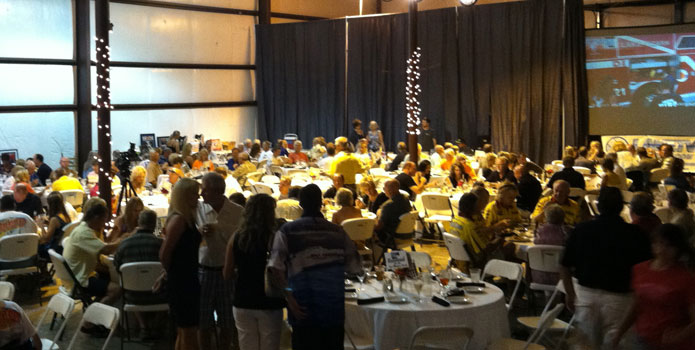 Hundreds of people were on hand last night to honor the first group of inductees into the Lake of the Ozarks Hall of Fame.

Hollywood types have called the folks who make their stardom possible “the little people”—at least those are the words that get tossed around most. But I think they have it backward. Without guys like Dorhauer, Ron Duggan—the event’s current organizer—and the rest doing the 12 months of planning and organizing that lead up to two days of top-speed runs (and a week’s worth of other events), there would be no show. And means there would be no stars.

In honoring the people who have made it all happen in the 25 years since the Shootout began, the selection committee didn’t just do the right thing. It set a precedent for future inductees both in the spotlight and behind it.

The Right Course to a Fast Cat