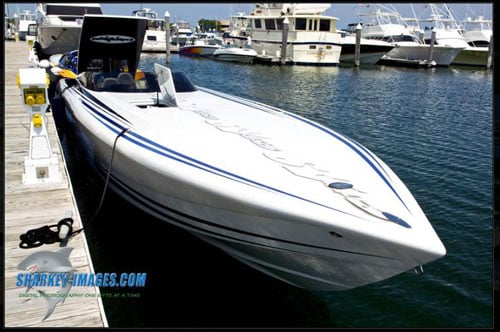 After a shaky start based on an initial lack of entries, six boats finally queued up to take the starter’s flag. At the end of the day, a 43-foot had set a new course record, and a four-engine Fountain held bragging rights on the outboard side.

Joe Cibellis and veteran offshore racer Joe Sgro gave as good as they got in the Outerlimits by recording an eye-popping 3 hour and 5 minute time on the 271-mile course. Powered by Ilmor 725 hp engines with matching drives, the pair eclipsed Stu Hayim’s one-boat record of 3 hours and 7 minutes and Bill Sirois’ older race record of just under 4 hours set with a dual 400 hp Mercruiser/Bertram in 1966.

The turnout doubled last year’s boat count and indicates that there may be a burgeoning demand and interest for such throwback events in an era that has seen offshore racing migrate away from big water, long distance races to closed courses on brackish bays, rivers and inland lakes. Kudos go out to all the contestants and especially to the duo who put on the race, Billy Frenz and Charlie McCarthy, a pair of veteran racers.

A series of web posts before and after the event gave me pause to consider this race in the light of today’s instant gratification world, and I submit the following purely editorial commentary on the potential and the pitfalls.

Personally, I would nurture this venue on the East Coast first, to gain a bit of momentum (which is precisely how the sport started originally). Six boats is not enough to support a cross-country circuit, yet. I think one Around Long Island and one Florida event would be plenty for next season, if the promoters concentrate on marketing them to the proper audience and participants.

Later the group could add a Lake Michigan event (Chicago-Grand Haven- Michigan City- Chicago) and then look at a Left Coast event when a larger fleet of racers has gathered. After that the series should grow on its own.

I also think that a “manufacturer’s challenge” has merit, pitting Outerlimits, Skater, Fountain, Formula,  Donzi, Spectre/Frisini, Velocity, and any other major builders against each other with Mercruiser, Ilmor, and Volvo providing the powerplants—and competing for bragging rights in the customer endurance marketing world.

Turbines? Nah! There is no consumer connection there. What you don’t want is a single industry-related series sponsor who will try to control the whole thing for the purpose of pushing their product. On the other hand a  Red Bull or American Express type of  backer would be perfect. This needs to be a clean sheet of paper thing with no sacred cows and very few compromises ( Kind of like Mother Nature…eh?). That means no “iconic” (i.e. well-compensated and closed-minded) “officials” from other racing organizations, no “trade-offs” to raise boat count with a bunch of trophy seekers.

What you want is a raw-boned atmosphere of “Marlboro men…and women” against the elements and each other, and then build the brand around that image (Don Aronow’s well-crafted persona mirrored in with each competitor. Think of the Odell Lewis, John Bakos, Bobby Moore, Joe Imprescia, Joe Sgro, Betty Cook, Sam Griffith, Bill Sirois, style of racer—complete with torn driving suits, bloody foreheads and elbows after each event.

Make it a series where you have to earn your respect—not buy it—and the “real racers” will show up. Mix in a bit of creative television with personality development and behind the scenes story boarding and, Voila’, you have a winning and compelling product and sport, with a very nice upside and no enormous investment. Just like the old days.