Your go-to source for performance boating.
HomeCommentaryCommentary: Change Is Not As Tough As You Think

When I sat down for lunch last week with Jason Johnson, the co-publisher and executive editor of Speed On The Water digital magazine, the first thing he did was hand me a check, a speedonthewater.com sticker and a copy of a competing boating magazine. It was the first time I had held a printed boating magazine in a year or so, and it was a bizarre sensation that caught me off guard. The texture, the glossy cover with a sexy, blistering-fast performance boat plastered across the front, the anticipation to see what was in store for me within the pages, I must say, it was nice. 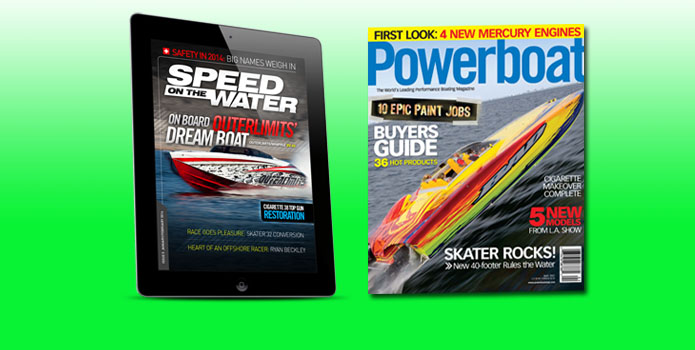 Although he misses his Powerboat magazine, Tank Sears is enjoying the interactive Speed On The Water digital magazine.

But then for a moment a distant feeling of sadness washed over me. I missed getting Powerboat magazine every month. The excitement of finding it in the mail and then later, while working for Powerboat, rushing over on print day to pick up the latest issue from the office—I suddenly realized how much I miss it. All of it.

It’s no secret that the boating industry took a huge hit as the economy came to a near halt in 2007. As people tightened their belts and buckled down, purchases of pleasure items such as high-performance boats took a nosedive. Many companies we’d come to know and love scaled way back and/or closed up shop, and that included Powerboat and other boating magazines. In a short period of time relative to its overall history, the performance boating landscape changed forever. And as with so many industries, the companies that comprise them either adapt or die with them.

Many media outlets—Powerboat included—were toying with online magazines before the crash. The Internet was covering from the dotcom implosion of 2000 and it was becoming obvious that online media made sense in many ways, not the least of which was cost. The horrid economy combined with the relentless progression of the “digital age” created a perfect storm that pushed print media closer to extinction and brought digital media to the forefront. Out of that mess came a cool daily content site for the high-performance powerboat world called speedonthewater.com started by Matt Trulio, who like Jason is another Powerboat magazine alumnus and—almost four years later—Speed On The Water digital magazine was born.

Even though Jason and Matt asked me to write for their new digital magazine, I have to admit that as a reader I struggled with the digital format. People like what they like and I liked to hold a printed magazine in my hands. It’s human nature to protest change and shun adjustment. No matter how excited I was to get to read the first few issues of Speed on the Water magazine on my tablet, change was still difficult.

But you know what? It’s not anymore.

I sat down this morning and downloaded the newest issue of Speed on the Water to my iPad. As it downloaded, the same feeling of excitement and anticipation of what I was about to find inside poured over me. Settling into my favorite chair, I thumbed through the “pages.” I got up and walked to the yard and sipped my cup of coffee while reading the features. At that moment, I realized one of the amazing benefits of a magazine online: instant access. You see an advertisement from Pier 57 and it reminds you of a boat you saw for sale there last week? No problem, a couple of clicks and you’re on the website. See a photo you really like? Zoom in to get a better look. Notice a promotion for an upcoming event? Pull up the search engine and start researching for more information.

In the end, the access and, wait for it, catchword—reader interaction—is unsurpassed.

Is change difficult? Yes. Is it possible to enjoy something actually more than you enjoyed its predecessor? Again, yes, and as I’m finding in this case, absolutely. Don’t get me wrong, a printed Speed On The Water would be nice, and neither Matt nor Jason are ruling it out some time down the road. But the digital format has grown on me to the point where, in many ways, I prefer it.

So here’s my suggestion: Stop pining for something that may or may not come back and download the latest issue (right here). Take that tablet into the bathroom, hit the beach, head out to the deck or take it to the office and read it when the boss isn’t looking. Download those issues and save them to a file for future reference. Enjoy the articles, photos, industry insight and information. (Naturally, as a contributor, I think the content is great.) Give it a chance—I think you’ll be pleasantly surprised.

Commentary: When Friends Have Your Back