I can’t assume everyone knows John “Kap” Caparell, but if you pay attention to the message boards—whether it’s OffShoreOnly.com, RiverDavesPlace.com or PerformanceBoats.com, you know Kap is an avid go-fast boater with an opinion that matches his confident personality. 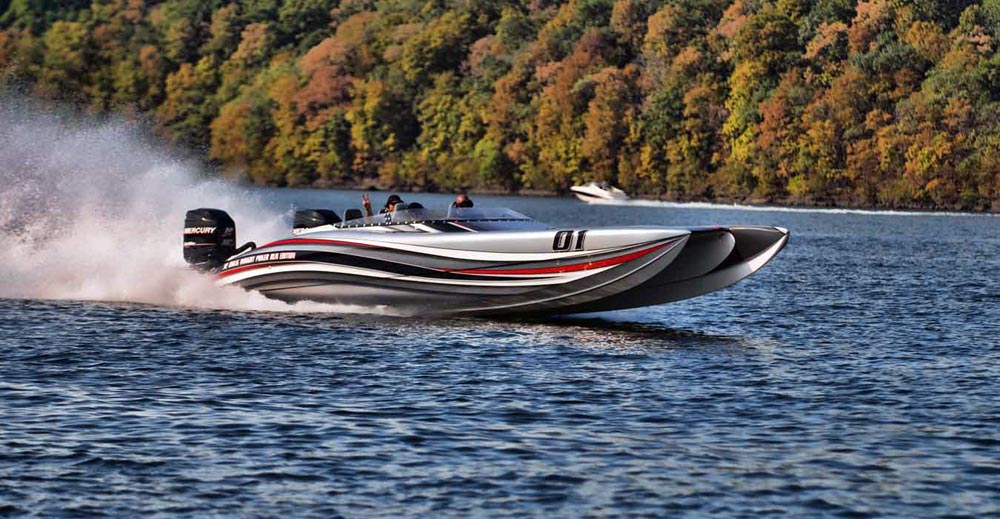 I met the San Diego native five years ago at the Lake of the Ozarks Shootout in Missouri and have gotten to know him pretty well between visits at the Los Angeles Boat Show, the Desert Storm Poker Run or at his downtown San Diego eatery, Caps Pizza and Bar. So it was especially cool to see Kap and his lovely wife, Lora, at this year’s Shootout in his new 32 Doug Wright Poker Run Edition, the first dedicated pleasure version of the heralded builder’s 32-foot catamaran. And it was even cooler when Kap—after some difficult setbacks—recorded back-to-back 113-mph top speeds in the Shootout to win his class.

Powered by twin Mercury OptiMax 300XS outboards, Kap’s sharp new ride has been on tour since making its debut at the Lake Havasu Boat Show at the end of April. From the Texas Outlaw Challenge to the Shootout poker run, Kap has been busy promoting his head-turning, aggressive-looking boat and his new venture, Doug Wright West, the exclusive dealer in the Western United States for all Doug Wright boats. 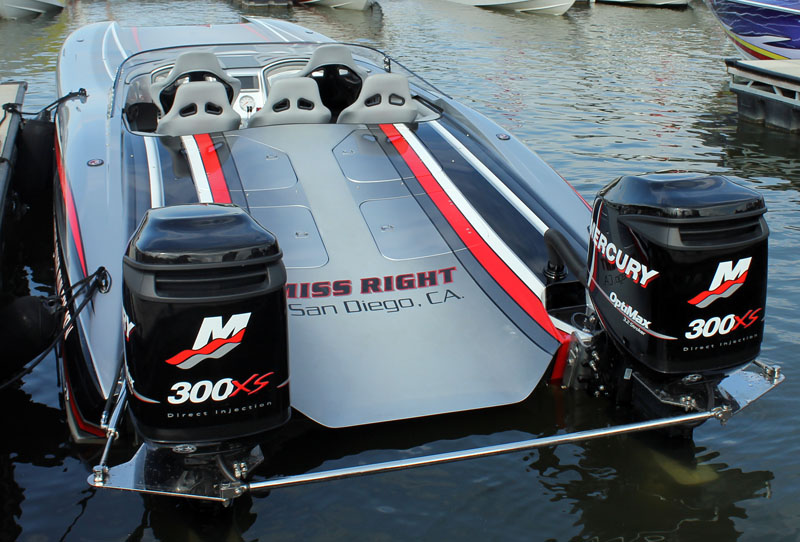 When I caught up with Kap, he was pulling into one of the poker run stops to refuel for the remainder of the poker run—he didn’t just come to the 24th annual event to run his boat for speed, he was there for the poker run fun as well. When I saw him some six hours later at his new favorite restaurant—City Grill in Osage Beach—he was a little concerned as a broken vertical shaft had him wondering if the Shootout was in his future.

Fortunately for Kap, through various contacts he connected with Advantage Marine LOTO in Sunrise Beach, and the marine center helped him get on the water. He missed the first day of runs on Saturday, but was at the docks at Captain Ron’s on Sunday ready to show what the efficient hull could do with a pair 300-hp outboards on the back.

“We worked on it all day Saturday and got here bright and early Sunday,” Caparell said. “We went out and laid down a good number (113 mph) and turned around and headed right back to the start line, got back in line and ran another 113. The boat was running good—really smooth. Other than our mechanical issue with the vert shaft, I’m really happy with how the boat is performing.

“One of the things with an outboard-powered boat is that you can hold it at 100 plus for miles, where the inboard guys are too scared of breaking their stuff—the reason I know that is cause I am (or was) an inboard guy,” continued Caparell, who also owns a Howard Custom Boats 28 Sportdeck. “I still have my Howard—I love it—but I don’t hold it wide open throttle for 20 miles at a time. I think nothing of it in this boat. I’m never going back.” 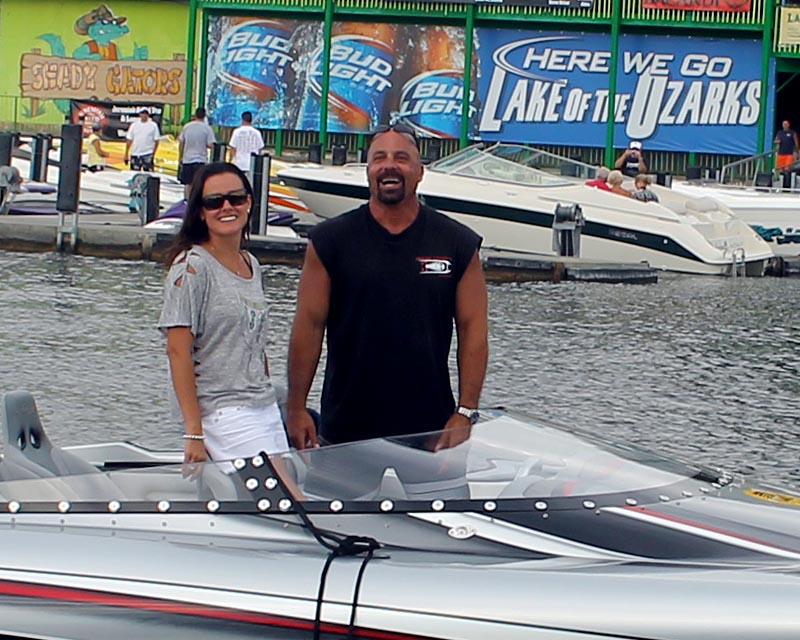 John and Lora Caparell enjoyed their time on the popular Midwest destination, Lake of the Ozarks.

It’s hard to argue with Kap, especially when he reports a fuel efficiency better than 3 mpg, but his deeply rooted passion for the 32 Doug Wright Poker Run Edition is quite clear. That’s why he ran the poker run one day and followed that up by competing on the mile-long race course in front of one of the largest spectator fleets in the world.

“Because we have a poker run boat, it’s imperative that we participate and promote the sport by engaging in the run, rather than hold back to preserve our stuff and just run it in the Shootout,” Caparell added. “You still have to be able to run the poker run, do the Shootout and hopefully not have anything break. Fortunately we made some great local connections and we were able to repair the boat in time to show off what it can do.”

I’d say 113 mph is awfully respectable, especially when I know the fastest speed Kap has seen throughout his hours of testing is 115 mph. Hats off to Kap for his efforts!