As I tend to do at least once a month, earlier this week I checked in with Justin Wagner of Waves and Wheels in Osage Beach, Mo. He was nowhere near his marina located at mile marker 26 on Lake of the Ozarks, but the timing couldn’t have been better as he was sitting with his good friend and a longtime project partner, Andy Imhof, who owns Maryland Offshore Performance Marine Center in Rockville, Md. The two were at Imhof’s shop hashing out ideas and timelines for upcoming projects on an almost 15-year-old 42-foot Outerlimits Offshore Powerboats V-bottom and the 1987 41-foot Apache Powerboats wave-crusher Scalp Hunter, a restoration Wagner and Imhof are beyond excited about—the same boat I wrote about in my column nearly a year ago to the day (read the story).

The two of them—and the talented crew behind each of their companies—have started making serious progress on Scalp Hunter, which is owned by Missouri performance boaters Mike Dullea and Todd Crossley, and I’m planning to release some more details and renderings of the project, which Imhof said “has a modern look that does justice to the Apache legends of the past,” and the Ford Excursion that Waves and Wheels has redone to haul the 41-footer next week on speedonthewater.com.

But the main reason Wagner and Waves and Wheels’ Idel Binet were visiting Imhof and his team was to check a few things off the list on Wagner’s personal project, the 46-foot Skater Powerboats catamaran that was built in 1997 and raced at one time by the legendary Reggie Fountain as the Fountain-Mercury 76 boat. That boat, which Wagner was originally going to do as the Transformers-themed Optimus Prime, is in the process of getting an entirely new look and a truly original theme. I’ve been sworn to secrecy for the time being, but the progress is such that Wagner plans to have speedonthewater.com unveil the design and more details on the boat on New Year’s Day.

Busy As Can Be At Waves And Wheels 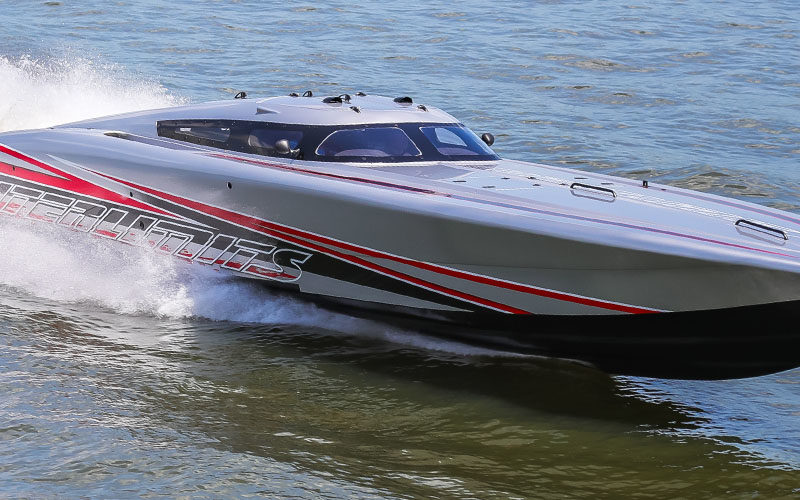