Visitors to Floating Dock H-I at the Fort Lauderdale International Boat Show, which opens Thursday, Oct. 26, will get the first look at the latest creation from Cigarette Racing Team in Opa-Locka, Fla. Called the 39’ Top Gun Open, the new model is based on the successful 39’ Top Gun hull but has no cabin and features a wide-open cockpit with extensive seating.

“You won’t find a rod holder or a fish box on this boat,” says Braver. “People who want to go fishing can buy our 39’ Top Fish. This is a true performance center console with incredible seating done in new double-stitched upholstery, a mind-blowing JL Pure audio system, an all-new T-top and a whole lot more.”

A quad-bolster set-up is in the aft section of the cockpit.

Highly stylized seating includes drop-down bottom bolsters at the helm station, contoured lounges in the open bow and a unique arrangement of four bolster seats—with one that swings out for access to the transom—in the aft section of the cockpit.

As a custom-built offering, the 39’ Top Gun Open can be ordered with a number of electronic options. The model at the Fort Lauderdale Show has a full Garmin “glass cockpit” featuring the 5200 series with two large 15” screens and four GSI-10 instruments. The Garmin set-up interfaces with the engines’ digital read-out to provide real-time feedback on operation and navigation.  The polarized display provides excellent visibility in poor weather or light conditions.

The model on display in Fort Lauderdale boasts twin 5200 Garmin GPS systems at the helm station.

Braver said that much of the concept for a true performance center console came from his friend David Woods, the owner of Pier 57, the owner of Cigarette dealer Pier 57 in Counce, Tenn.

“I think this is where the future of high-performance V-bottoms is headed,” said Woods. “The 39’ Top Gun Open is a true 75-mph boat with outboards on a proven 39’ Top Gun hull with no hassles. You don’t need a wide-load permit to tow it and it comes with a seven-year engine warranty. How many boats come with a seven-year engine warranty? We’ve been working on it since the (2011) Miami Boat Show. It’s kind of my baby.”

Added Braver, “This boat was very well thought-out and planned. It took 18 months in design to combine performance with boating convenience and ease.”

The 39’ Top Gun Open also features an array of new billet hardware from the dash to the engine compartment. According to Braver, creating the billet pieces required more than 300 hours of engineering.

Price has yet to be released.

An overhead look at the 39′ Top Gun Open’s all-new T-top. 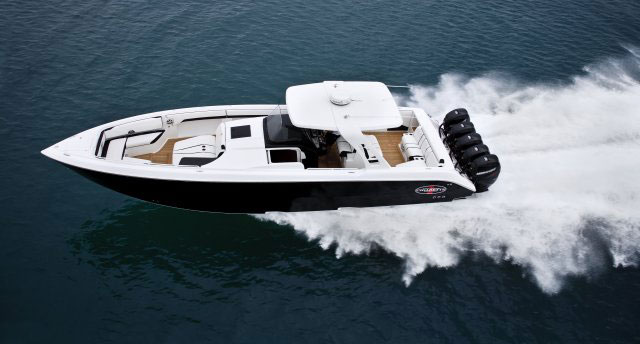