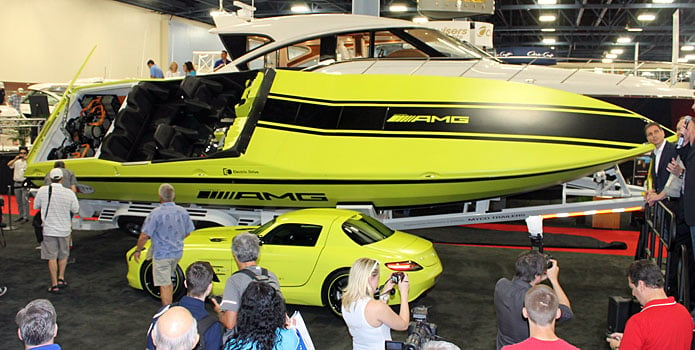 In a true technological collaboration with branding partner Mercedes-AMG, Cigarette Racing Team unveiled an electric 38’ Top Gun at the Miami International Boat Show this morning. According to a press release from the company, a number of components from the SLS AMG Coupé Electric Drive were integrated in the design of what is being called the “Cigarette AMG Electric Drive Concept.” 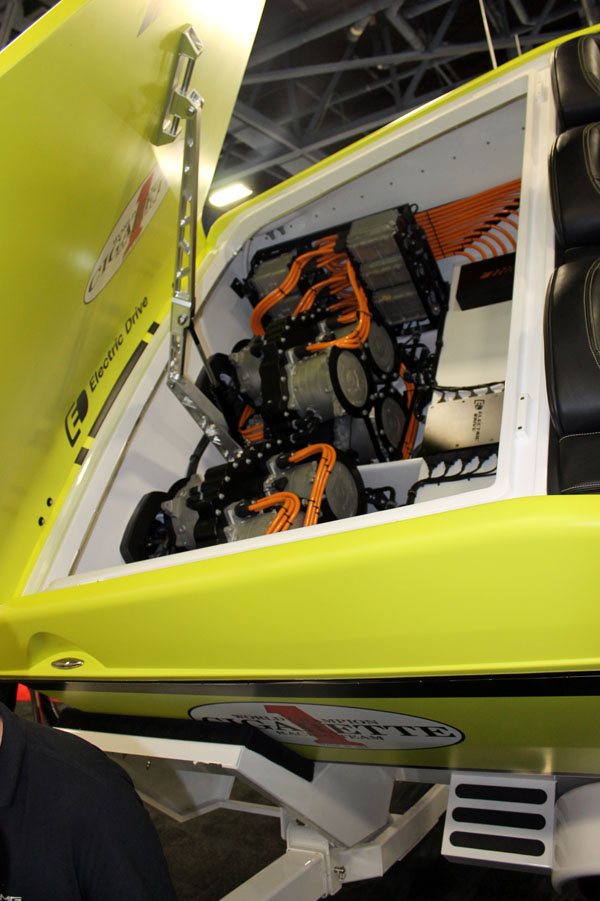 Cigarette’s 38-footer is fitted with the 12 compact, liquid-cooled permanent-magnet synchronous electric motors, which are the signature piece of the SLS AMG Coupé Electric Drive. Each electric motor delivers 138 kW and 250 Newton metres.

With an output of 1,656 kilowatts—2,220 hp—and a maximum torque of 3,000 Newton metres—2,213 foot-pounds—the 38-footer reportedly is the fastest and most powerful electrically driven offshore performance powerboat in the world. According to the release, the technology and performance and design of the Cigarette powerboat is closely based on the electric super sports vehicle made in Affalterbach, Germany. The one-of-a-kind creation was inspired by the SLS AMG Coupé Electric Drive, the world’s most powerful and fastest electrically driven series production.

On hand for the unveiling this morning were top executives, engineers and designers from Mercedes-AMG, as well as Cigarette owner and chief executive officer Skip Braver, Cigarette dealers Scott Sjogen of Pier 57 Marine and Phil Lipschuz of Lip-Ship Performance and the rest of the design team from Cigarette. Also on hand were several longtime Cigarette customers, including Luca Formilli Fendi.

“It is very exciting and very impressive,” said Fendi, who has owned four Cigarettes and currently owns a 50’ Marauder with triple Mercury Racing HP1075SCi engines. “I still like my gasoline boat, but this is very interesting.”

Editor’s Note: Look for an interview with the head of engineering from Mercedes-AMG later today or tomorrow morning on speedonthewater.com.