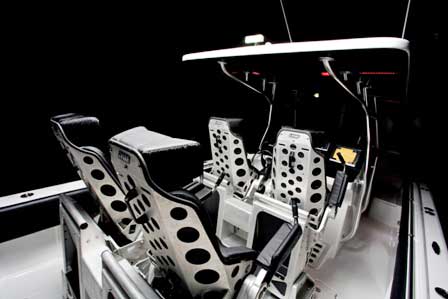 The naysayers came out in force when Cigarette Racing Team introduced its 39 Top Fish center-console model several years back. It wasn’t a real fishing or dive boat. It couldn’t compete with the likes of Midnight Express, Yellowfin and Contender. It was too expensive.

Turns out that Skip Braver, the owner and CEO of the Opa-Locka, Fla., company, could not have made a better move. Since the day it was added to the Cigarette line, the 39 Top Fish has been a strong seller. It’s an unquestionable success.

Now the company has introduced a “military version” of its center-console 39 Top Fish. The no-frills, no-nonsense 39-footer features four Stidd shock-mitigating seats, which were originally designed for use by the U.S. Navy Seals, and a completely digital helm station. Power is provided by a trio of 300-hp Mercury Marine Verado outboard engines.

The military version of the 39 Top Fish will be on display at the 2010 Miami International Boat Show alongside the much-awaited Cigarette Mercedes AMG concept boat. (You can find more on the Cigarette AMG in an earlier post to this blog.)

Look for a complete story on the “militarized” 39 Top Fish in the next issue of Powerboat magazine, which also will be available at the Miami Show.

Winterizing In the South: No Joke Right Now