Your go-to source for performance boating.
HomeProjectsCigarette 36 Gladiator Gets Makeover from Waves and Wheels

Tom Roof knew he wanted to update the interior of his 2004 Cigarette Racing 36 Gladiator to give himself and his passengers a little more space inside the cockpit. He figured the best way to do so was to take the sit-down-style V-bottom powered by a pair of 800-plus-hp engines from Richie Zul Marine Power in New York and convert it from a five-seater to a four-seater. 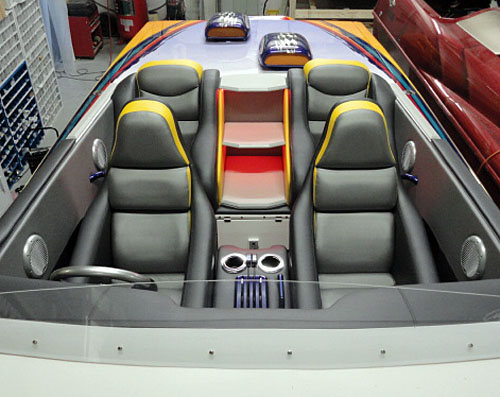 Waves and Wheels recently completed an interior makeover on this 2004 Cigarette 36 Gladiator, converting it from five seats to four.

So Roof, who purchased the Lip-Ship Performance edition boat at the end of 2010, turned to the talented team at Waves and Wheels in Osage Beach, Mo., to tackle the project.

“The paint and exterior of my boat is almost flawless, but the interior had obvious signs of wear,” said Roof, explaining why he wanted to update the cockpit of the 36-footer, which was on display at the 2004 Miami International Boat Show. “I came out of a 2008 Cigarette 39 Top Gun with (Mercury Racing) 700s and the Gladiator’s cockpit is so different. It is much tighter—it’s more like a cat. And there are no steps to exit the cockpit like the Top Gun had. The only way out is to step on the seats. So I came up with the idea of converting it to a four-seater and one thing led to another.”

Roof turned the 36 Gladiator over to Waves and Wheels for the interior design and modification in February, and he was extremely pleased with the boat when he got it back from the shop a couple of weeks ago.

“When my wife saw it, she said it looked like a brand new boat—she was blown away,” Roof said. “The quality of work they did was great. Justin (Wagner, owner of Waves and Wheels) had a lot of good ideas. At the same time, he was open to my feedback. It was a lot of fun to work with those guys. I can’t wait to run the boat this season.” 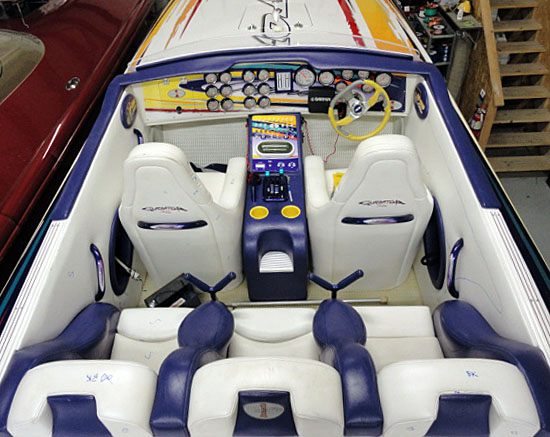 This Lip-Ship Performance edition Cigarette was one of the boats on display at the 2004 Miami International Boat Show.

While the modifications done by Waves and Wheels are easy to see in the images below, here’s a more detailed run through of everything the crew accomplished in the makeover.

Starting with the company’s bread and butter, Waves and Wheels upgraded the sound system with four speakers, one subwoofer and full iPod control. Originally set up with the controls in the center console between the driver and co-pilot seats with the accessory switches and stereo head unit up ahead, the crew redesigned the center console. First, the switch panel was updated and a new head unit was installed in a glove box built into the console.

To provide easy access to the bow and the fender storage in the deck, Waves and Wheels added a custom center console step and installed a mini stereo remote flush below the step, which is located under a new Garmin GPS display.

As part of the redesigned dash, the GPS screen was mounted between the clusters of original Gaffrig gauges, which were reorganized on the symmetrical three-panel dash created by Innotech Products. Waves and Wheels, which just launched its new website, also added new interior panels with modern styling and materials that matched the custom charcoal, gray and yellow upholstery on the cockpit’s four bucket seats.

As Roof requested, the crew removed the center back seat and fabricated custom steps to leading up to the engine hatch. The steps included red LEDs that matched the rest of the lights in the cockpit. Last but not least, Waves and Wheels added custom foot tubs for extended legroom and to provide easier access for service behind the helm.

“Before we added the foot tubs, you’d have to remove most of the cockpit just to work under the dash—it was pretty crazy for what should be a simple repair,” Wagner said. “Overall we are extremely proud of how the Gladiator turned out. It took our entire team to complete the project. This is a perfect example of what Waves and Wheels can truly offer.”