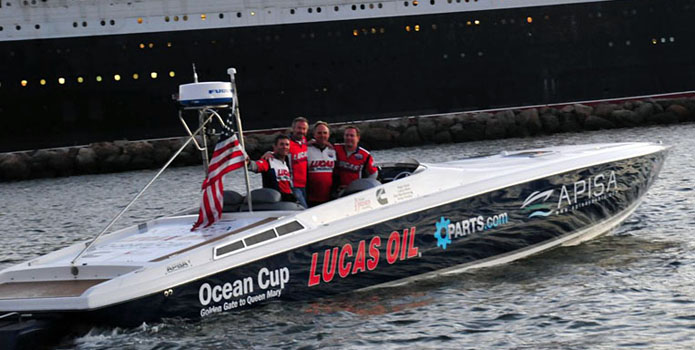 The endurance record run attempt yesterday went nothing like the four-man team of Andy Hindley, Nigel Hook, Dan MacNamara and Lance Ware was expecting as it left San Francisco at 8:30 a.m. in the diesel-powered 48-foot APISA Sport Yachts V-bottom. And therein lies the beauty of offshore endurance runs.

In an effort to establish the Lucas Oil Ocean Cup – Golden Gate to Queen Mary record, the crew was expecting to arrive in Long Beach, Calif., somewhere between six and seven hours. But rough seas and mechanical issues throughout the 435-mile run pushed that mark about three hours behind schedule.

Finishing in 9 hours, 50 minutes and 51 seconds after a grueling day in the Pacific Ocean, the team cruised into the finish line in front of the historic Queen Mary at sunset, destroyed windshield and all.

“We were averaging close to 70 mph for the first couple of hours but we encountered a slight electrical problem with a wiring harness that slowed us up,” said Hook, the world champion offshore racer who was on the team with MacNamara in 2003 that set the diesel-powered San Francisco to Los Angeles endurance record in 6 hours, 43 minutes. “Dan fixed that and we got going again, but then we encountered some fuel issues. Not only was that happening, but the water kept getting bigger so we had to drop our speed quite a bit.”

Hook said the team actually “stuffed” the boat a couple of times, crushing the windshield during one of the impacts and busting a couple of bulkheads along the way.

“It was the worst conditions I’ve ever seen in the Pacific so close to shore,” Hook said. “It didn’t help that we had to deal with water in our fuel for much of the run. I give credit to Dan and Andy—they never gave up. They did a great job cycling and recycling the fuel filters and draining the water. We stopped about an hour from the finish to deal with the problem and we thought about just calling it quits and going into Marina del Rey, but we kept going and made it just as the sun was going down.

“It was brutal out there—it wasn’t a day for setting a record, luckily we were establishing one,” Hook continued. “The record is very beatable. On a flat day, I’m sure someone could probably knock a few hours off of it. Still it was a wonderful day—a wonderfully long day.”

Although the team would have welcomed a smooth day to establish a more competitive record, Hook and Hindley—the America’s Cup chief operating officer—admitted the run wouldn’t have been nearly as adventurous.

“I spent 52 days at sea during one leg of an around the world race (in ’96-’97) and we had as many crashes and bangs in nine hours and 51 minutes as we did in 52 days,” Hindley said. “It was incredible though—I’m really glad I did it with these guys. It was a shame about the engine issues, but that just added to the adventure.”

Hook thanked everyone who stuck around and welcomed the team into Long Beach, and extended a special thanks to sponsors Lucas Oil and Parts.com.

Hindley On Board for Saturday's Lucas Oil Ocean Cup Rec...