At least three people—Frank Civitano, Joe Nasso and me—were particularly bummed when Bob Christi told us he was selling his prized Speed Racer 44-foot Marine Technology, Inc., catamaran last year. Of course, our collective sorrow was completely self-serving because Christi has let each of us drive the cat in poker runs while he throttled. As a friend of mine once said, without self-interest there is no interest. 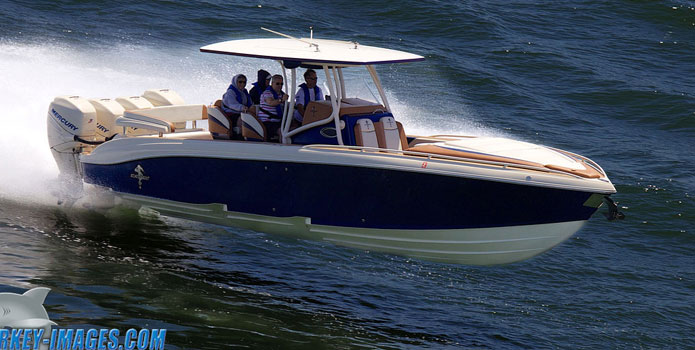 Bob Christi loves his 36-foot Statement center console, but that won’t stop him from buying another go-fast boat in the near future. Photo courtesy/copyright Tim Sharkey/Sharkey Images.

But Christi, who has homes in New Jersey and Florida, was burned out on the hassle of flat-trailering a wide load cat and had no interest in taking on the expense of a new tilt trailer and the rig required to pull it. That’s a major conundrum for a guy with a wide-load cat, especially one who “doesn’t like to boat in the same place all the time.” And that wasn’t all.

“At poker runs with Speed, we usually had more people who wanted to go in the boat than we could fit in the boat,” said Christie.