With the increasing popularity of the Buffalo Poker Run among poker run enthusiasts in the Northeast, the organizers have created three speed classes for the August 9-10 event this year.

“Because of the faster and faster boats we’re getting, especially from the Performance Boat Club of Canada, we knew we had to create speed classes,” said Anthony Scioli, one of the organizers for the annual run. “The classes are boats up 70 mph, boats from 70 mph to 110 mph, and boats over 110 mph.” Like the insurance-mandated rules of the recent Desert Storm Poker Run and all of the Florida Powerboat Club poker runs, the Buffalo Poker Run rules do not permit backseat passengers in boats running more than 110 mph.

Because of its mid-summer date, the Buffalo Poker Run, which added new sponsor Double R Performance this year, has in the past conflicted with other poker runs. To avoid schedule overlap, the run’s organizers worked closely with members of the Performance Boat Club of Canada, and the club, which has six runs of its own this summer, did not schedule an event on the same weekend as the Buffalo run.

The Buffalo run does conflict, however, with the popular 1,000 Islands Poker Run put on each year by Poker Runs America.

“Our schedulng challenge is that our venue, Templeton Landing, is so popular that we have to book it out three years in advance,” said Scioli. “We know the weekend this run will be on three years from now.” 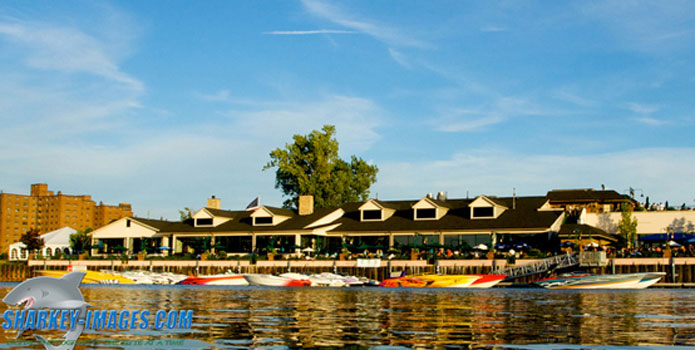 Templeton Landing is the host venue for the event.

For its course, the Buffalo Poker Run uses portions of Lake Erie and the upper Niagara River. In the event of poor conditions, the organizers have a alternat “storm course” that only runs on the river.

A portion of the proceeds of the event go to Buffalo, N.Y.-based Excalibur Leisure Skills, which according to its website provides “cost-free boating and fishing opportunities for the disabled and disadvantaged.”

Last year, the event, which was forced to use the alternative course because of rough weather, attracted 60 boats—all of which ran “in the rain” that day, according to Scioli. At present, 25 boats are registered of this year’s run, but Scioli said that registrations pick up as the July 1 deadline nears.

“We had a lot of guys come down from Canada last year, and a lot of those guys are coming down with friends again this year,” he said. “We wanted to grow the event, and it’s happening. We’d like to keep the boat count to about 80. We know we have the waterways and the facilities to handle it.”