Grant Bruggemann, who throttled 52 offshore races for the Stihl team in a 38-foot Skater catamaran since he started with the team in 2008, has departed the Stihl group and is the new team manager and throttleman for the Broadco outfit. The Broadco team joined Super Boat International’s Superboat-class ranks last year with its 40-foot Marine Technology, Inc., catamaran powered by twin 750-hp engines from Scorpion Racing Engines. 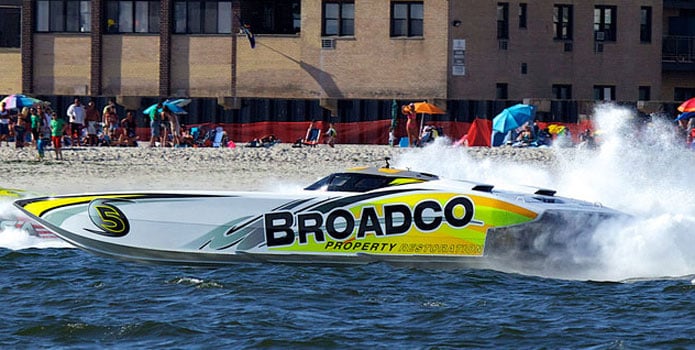 Bruggemann will throttle the 40-foot MTI Broadco cat during the 2014 season, as well as handle its setup and managment for the team. Photo courtesy/copyright Tim Sharkey/Sharkey Images.

“It was somewhat emotional resigning from Stihl and sitting face to face with J.R. (Robert J.R. Noble, the Stihl team’s owner and driver) and telling him that I had been made an offer and was moving on,” said Bruggemann, the 43-year-old owner of Grants Signature Racing, a rigging and setup shop in Bradenton, Fla. “We spent many hours of testing and racing together. We did a lot of family activities together.

“Broadco is an up and coming team with all the right equipment,” he continued. “All they need is someone to help organize and run their program to get the team where it wants to be.”

“I couldn’t be more ecstatic that our organization is getting Grant’s setup, rigging, throttling and team management skills,” said Broaddus. “The Superboat class is going to be very competitive this year and we are taking it to the next level and stepping up our game. All of the stars aligned and we were able to put a deal together with Grant. It’s good for everyone involved. With the accelerated level of participation and competition in this class, we definitely want to be on top.”

Noble said that a replacement for Bruggemann on the Stihl team has not yet been determined. “We are in the process of doing that,” said Noble, who added that the team will make several announcements about its plans for the 2014 offshore racing season in an upcoming press release.