Your go-to source for performance boating.
HomeProjectsBirth of the Beak: Fountain Hull No. 1 Lives at Shogren Performance Marine

Birth of the Beak: Fountain Hull No. 1 Lives at Shogren Performance Marine

Birth of the Beak: Fountain Hull No. 1 Lives at Shogren Performance Marine High-performance powerboats from 1981—at least those in anything close to resembling good condition—are in short supply. True, fiberglass and resin form durable a finished product, but not so durable that they can withstand the elements and neglect for almost 31 years.

That’s just one aspect of what makes Fountain Hull No. 1, dubbed the 10 Meter Executioner by Reggie Fountain, the founder and former owner of Fountain Powerboats in Washington, N.C., so remarkable. Owned by Scott Shogren of Shogren Performance Marine, the most successful Fountain dealer in history, the 33-footer remains in pristine condition.

“We built that boat for Henry Lorin of New York,” recalls Fountain. “It had a pair of Mercury 475-hp turbocharged engines we had done a lot of research and design with at Lake X.

A rearview look at a classic.

The 10 Meter Executioner was two feet longer than the Excalibur-built 31-footer. The added length came from extending the boat’s nose, as well as adding an integrated swim platform. Fountain says he also modified the boat’s hull.

“That boat always ran and handled very well,” he says. “With a lot of help, I tooled the first one with my own two hands. I helped hammer and nail it together and I did a lot of the testing.”

The interior of the 33-footer is as well-preserved as its exterior.

Fountain says he is pleased, though hardly surprised, that Fountain Hull No.1 ended up at Shogren Performance Marine.

“Next to Fountain Powerboats, Scott has probably owned more Fountains than anyone,” says Fountain. “The last time I saw it, the boat looked brand-new. If you take care of these things and don’t drill holes in the wrong spots, they’ll last forever.”

Look closely and you can read the original serial number for hull No. 1. 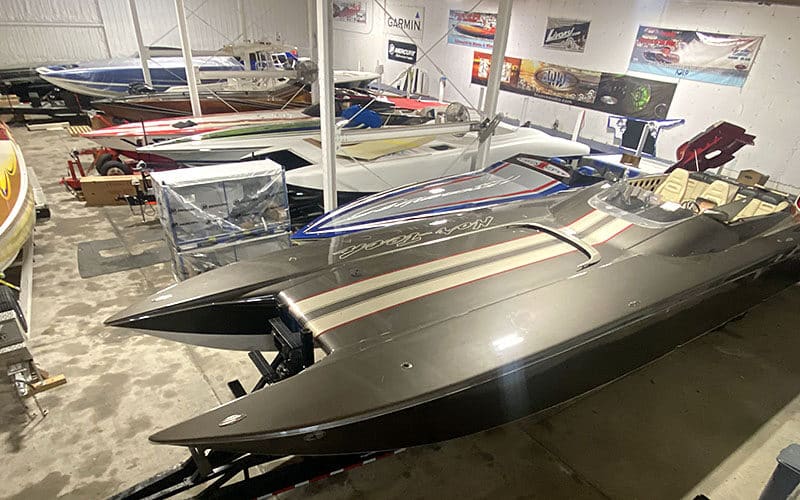