Your go-to source for performance boating.
HomeCommentaryBig Things in Store for 25th Lake of the Ozarks Shootout 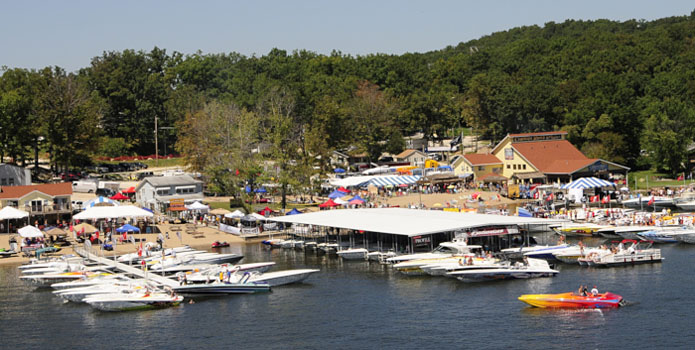 With the Lake of the Ozarks Shootout set to turn 25 at the end of August, I for one am already getting excited about the week-long event, which takes place August 17-25. Arguably one of the best performance boat events in the country, the Shootout on the Missouri lake raises a ton of money for local charities and features some of the baddest boats on the planet.

Recently I caught up with Ron Duggan, owner of Captain Ron’s Bar & Grill, which has been hosting the Shootout since 2008 (the previous events took place at the non-existent Shooters 21). Duggan informed me that there are plans in place to introduce a Shootout Hall of Fame as well as a memorial to honor the late Bob Morgan—a legend on the lake who never missed a Shootout. 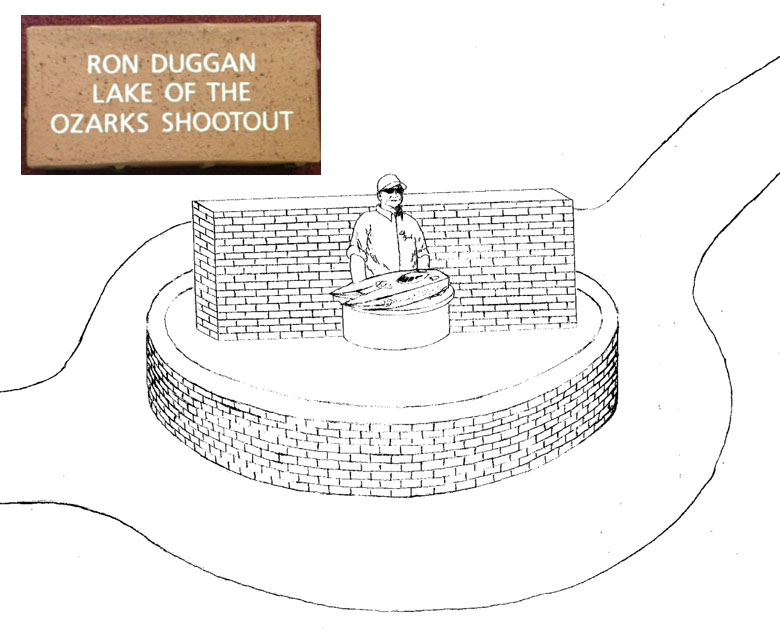 A memorial in Bob Morgan’s honor will be erected at Captain Ron’s in time for the 25th annual Lake of the Ozarks Shootout. Organizers plan on selling engraved bricks (like the one pictured) as a fundraiser for the event.Details aren’t completely final, but Duggan did send me a rendering of the Bob Morgan Memorial Shootout Hall of Fame that will include a bust of Morgan surrounded by a short brick wall with Hall of Fame nameplates mounted on the opposite side of the wall. As a fundraiser, Duggan said the Shootout will be selling engraved bricks on the wall and on a paved walkway leading to the memorial that he expects to keep growing around the property year in and year out. Once brick purchasing is available online, speedonthewater.com will provide further details.

As a special touch for the debut of the Shootout Hall of Fame, organizers are planning a Tuesday evening induction ceremony dinner that will be open to the public and limited to 300 people. Duggan said tickets will be $20 with half of the proceeds going to the Shootout charities. The unveiling of the memorial with the inaugural Hall of Fame class names will take place Saturday before the start of the Shootout.

On a different note, I caught up with defending Top Gun champion Greg Olson at the Desert Storm Poker Run in Lake Havasu City, Ariz., last month and he confirmed that he will be returning to the Shootout this year but he won’t be attempting any top-speed runs. He’s committed to the retirement he announced after last year’s 192-mph run (read the story) in his Eliminator Boats 33 Daytona with twin 1,800-hp engines from GT Performance. Olson, who has been attending the event since 2002, added that his boat will be on display at the Shootout street party on Wednesday evening and that he will be on hand all week to soak in the activities from a spectator perspective.

Shootout spectators should be in for a good show this year though as Bill Tomlinson confirmed his plans to return to the Shootout in My Way, his 50-foot Mystic Powerboats catamaran that earned him the 2011 Top Gun trophy with a top speed of 208 mph. Although Tomlinson wasn’t able to run the boat in 2012 after wrecking the boat a few weeks before the event (read the story), he is expecting to return this year and lay down a big number—big as in 215 mph or faster.

Rumors have been swirling about other boats that could show up and contend for the Top Gun title, but even if My Way doesn’t have much competition, this year’s Shootout should be legendary.