Earlier today, Big Seas Productions, LLC, which has one of the world’s most extensive video libraries of offshore powerboat races, launched its new website with direct sales—the first time in the history of the outfit—of its DVDs. While the Big Seas collection of more than 240 videos primarily chronicles offshore racing from 1978 to 1992, the outfit has acquired more recent video footage from the Pacific Offshore Powerboat Racing Association and the Great Lake Powerboat Racing Association, both of which been mostly inactive since the mid-2000s. 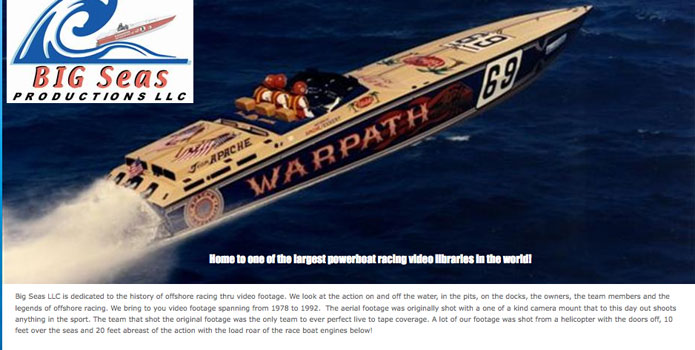 “We had a site done for Big Seas about eight years ago, but it was pretty rough and we’re really happy with the new site,” said Dave Patnaude, who owns Big Seas with his partner Rich Luhrs and Luhrs’ son, Darren, who edits all the videos. “We’ve never sold direct before, but with the new site—we added a PayPal account—we are now able to take orders and ship direct.”

The home page of the new site is divided into three easy-to-navigate sections.

Big Seas Productions recently sold footage to the Biography Channel for a segment on its “Gangsters: America’s Most Evil” series focusing on Augusto “Willie” Falcon and Salvador “Sal” Magluta—two big players during the 1980s in the cocaine smuggling and offshore racing scenes—as well as to ESPN for an episode of its superb “30 For 30” series on the legendary Don Aronow of Cigarette Racing Team fame.

To help online customers with the shopping experience, Big Seas has divided the lower half of its home page into “Video Samples,” “DVDs For Sale” and “List Of Races” sections. To enter each section and view its contents, visitors simply click on its respective header. For those looking for a place to begin, “Video Samples” section presents a broad assortment of snippets from the DVDs, which are priced $39.99. (Substantial discounts are offered multi-DVD packages.)

Vistiors who want a quick look at Big Seas’ offerings will want to check out the “Video Samples” section.

Big Seas also is offering custom DVDs from its extensive library. “If somebody wanted just footage of Cigarettes racing or Bobby Saccenti’s races, we could bundle that together on a DVD,” said Patnaude.