One of the last remaining significant poker runs in California—while Lake Havasu borders California and Arizona the Desert Storm Poker Run is an Arizona-based event—the annual Big Cat Poker Run, August 16-17 on the Sacramento River Delta, could attract 70 or more high-performance boats this year. The run, which started in 2000, is now organized by the Discovery Bay (Calif.) Lion’s Club—proceeds from the event go the club’s charity programs—and has Teague Custom Marine as its title/charter supporter.

“We feel that it is important to provide continuous charity support to the Discovery Bay Lions Club, which in turn supports many causes in the community,” said Bob Teague of the Valencia, Calif.-based company. 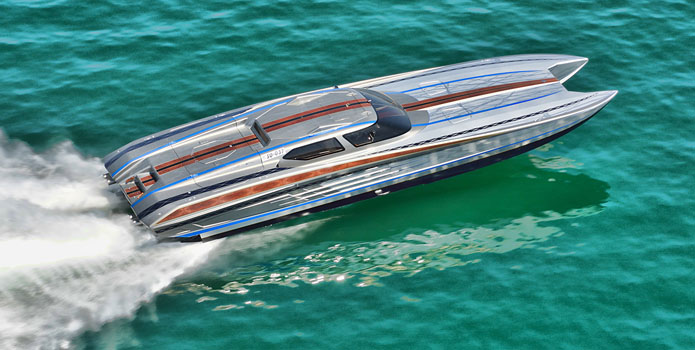 Covering approximately 70 miles, the Big Cat Poker Run starts at the Discovery Bay Marina and makes its first stop at the Pittsburg Yacht Club and Marina. From there, it heads to the new docks in downtown Stockton for its lunch stop, complete with live music, at the University Plaza Riverfront Hotel.

“The hotel was recently redone and is absolutely beautiful,” said Allen Bellinghausen, one of the original Big Cat Run organizers who is working with the Lion’s Club on the event as a consultant. “They have a pool and a very large lawn area where they set up the tables for lunch and a band, and we just have a great time. It’s actually kind of hard to get everybody out of there when it’s time to head back.”

After lunch, the poker run fleet returns to Discovery Bay Marina, where participants receive all their cards, which are played later during the event’s dinner and awards ceremony, again with live music.

Repeat participants from outside the area—the Big Cat Poker Run typically draws go-fast boat owners from Southern California and Arizona—will notice something new this year in Discovery Bay, a lighthouse donated by Ed and Jean Stewart and installed by members of the community.

In addition to bringing its promotional trailer to the Big Cat Poker Run, Speedonthewater.com will provide real-time coverage of the event on the website, as well as featured coverage in the September/October isssue of Speed On The Water magazine.

Editor’s Note: Speedonthewater.com and Speed On The Water magazine will provide coverage of the 2013 Big Cat Poker Run and will have its promotional trailer on site during the event.

Live Now! Speed On The Water Magazine Issue No. 2