Your go-to source for performance boating.
HomeIn the NewsBBlades Offers Its Own High-Performance Outboard Propellers 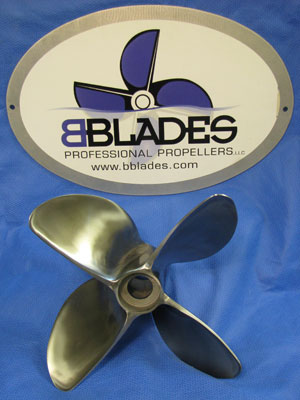 BBlades Professional Propellers has introduced its own, proprietary line of propellers called the Blaster (trademarked) series for outboard engines, according to a press release from the Princeton, Wis., company. The four-blade, over-hub exhaust high-performance propellers are designed for a variety of outboard applications from single-engine, pad V-bottoms to multi-engine catamarans.

The Blaster propeller has an “introductory period” price of $799.00.

“From day-one, having our own propeller offerings has been a goal, so this is a natural progression,” said Brett Anderson, the co-owner of BBlades, in the release. “It has taken some time, but we wanted an offering that wasn’t a “me too” product—something to fill a need. Our passion for performance boating and our knowledge of the available prop options out there make us very confident customers will be pleased with the Blaster.”

According to the release, the Blaster is a “clopper-style” propeller—half-cleaver and half-chopper, with the best characteristics of each. Like a cleaver, the Blaster features small blades with a straight trailing edge. The over-hub exhaust reduces drag and performs best piercing the surface of the water. Like a chopper prop, its blades are streamlined—rounded with a big cup on the trailing edge. The full, parabolic rake angle increases as the blade moves away from the hub creating overall lift from the transom to the bow.

To accommodate a wide variety of setups, the 14-3/4-inch diameter propellers are available in right-hand and left-hand rotations and in pitch sizes from 24- to 32-inches in two-inch increments. Each Blaster propeller, which begins as a solid one-piece casting of 98-percent virgin stainless steel, is fully tuned, cut, shaped and honed to a Satin Brush Race Finish at the BBlades shop, according to the release.

Hering on Boosted Event Support: “Even in a down year, you s...