As the Mercury Racing HP700SCi engines come out of warranty, many customers have opted to increase the power with superchargers and other modifications. For Brand X Hi-Performance Marine owner Jason Ventura, he noticed the extra horsepower was creating too much stress on the complementary NXT1 drives of some of his customers’ boats, causing them to lock up or blow up. 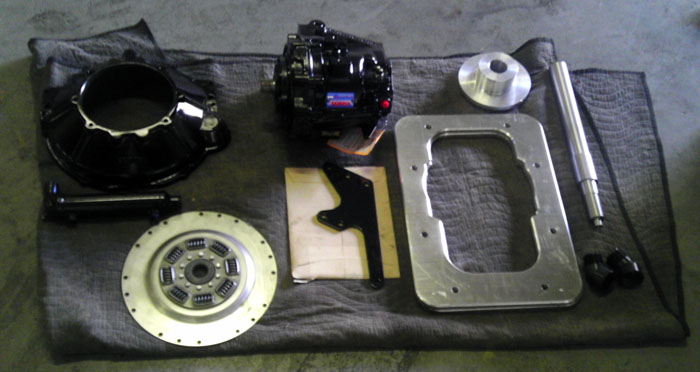 So Ventura, who opened his one-stop service shop in Pembroke Park, Fla., five years ago, contacted his good friend Marc Berman, owner of BAM Marine in Pompano Beach, Fla., and asked him to create a solution.

“We started on this in September,” Ventura said. “Some of the parts, such as the bell housing and flywheel, were off-the-shelf parts, but everything else was designed and built at BAM Marine. A lot of the parts had to be exact lengths so they were pretty intricate.”

Berman, who founded BAM 34 years ago, said that while the HP700SCi/NXT1 package uses a compact external gearbox with an ingenious cone clutch arrangement to provide forward, neutral and reverse, it can become the weak link in upgraded 700s.

The transmission kit was on display at the Statement Marine booth in Miami.“We developed a way to allow the installation of our proven transmission without requiring the remounting of the engines,” added Berman, referring to his company’s Cyborg 1500 transmission and the fact that the transmission can still be removed from the rear—like an NXT1—so you won’t have to take out the engine. “It has greatly simplified our ability to accommodate extra torque where needed.”

Ventura said an entire kit, which retails for about $22,000 for twin engines and was on display at the Miami International Boat Show, includes two BAM Cyborg 1500 transmissions, two bell housings, two transmission coolers, two transom spacers, a billet linkage kit, blueprinted drive plates and all the new hardware and gaskets. Besides an inexpensive driveshaft, which varies in length from boat to boat, the only things not included in the kit are the rear motor mounts and some hoses.

“Marc built all the parts and Anthony and I were the test dummies,” Ventura said. “Me being the installer, and Anthony being the owner. Everything looks good on a drawing, but in the real world it doesn’t always work that way. So my involvement was to be the hands-on guy in the R&D phase. I documented everything along the way, basically I’m writing the instruction manual.

The transmission being installed on a twin-engine 39-foot Outerlimits.“I tested the boat after it left my shop and on my way from Pompano to Miami on my way to the poker run,” he said. “I ran it on the outside and never let up. We have more than 700 hp in these engines (almost 900) and the boat ran flawlessly all the way to Islamorada and back. The new kit didn’t change the handling characteristics one bit.”

Ventura does recommend waiting until after your engines and drives are out of warranty—Mercury provides a one-year limited warranty—before making any modifications to the engines or the drives.