Your go-to source for performance boating.
HomeIn the NewsBaja, Donzi, Fountain and Pro-Line: “Busier Than a One-Arm Paper-Hanger.” 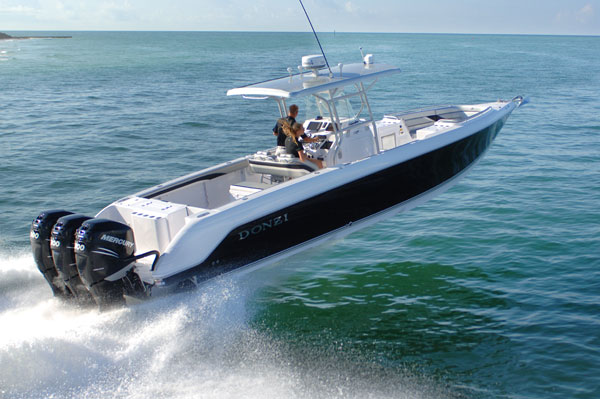 Employment is up and boat orders, at least for Pro-Line, are backlogged—that’s the word from John Walker, the top-man at Baja, Donzi, Fountain and Pro-Line. Manufactured at the Fountain plant in Washington, N.C., all four brands are owned by Liberty Associates, a venture capital outfit. Walker is on Liberty’s board of directors.

“We are currently busier than a one-arm paper-hanger with an itch,” said Walker with a hearty laugh. “When I got here in September (2010), we had 28 or 30 people working here. Now we have 165. All but five of them had previously worked at Fountain. We got to bring back 130 employees. By this time next month, we intend to be pushing 200.”

According to Walker, the significant increase in staff and the plans to add more personnel have been driven by the market. At present, Pro-Line is the builder’s most in-demand brand.

“We have a backlog and my vice president of sales for Pro-Line was just in here fussing at me,” said Walker. “But we also have to pick up production with the Fountain and Donzi lines. We’re in the middle of a commercial contract for a South American company building 38-foot Fountain pilothouse models.

Walker said that while dealer demand for the re-launched Baja sport boat brand is solid—the company reportedly has 12 orders for Baja models—the first new Baja won’t be released until July.

That model, a 26-foot Outlaw, currently is in production.

“On the Baja thing, we have dealers who are fussing because we are not ready to go into full production yet,” said Walker. “Yet they understand that and still want to sign dealer agreements anyway. There’s a tremendous amount of international interest in the Baja line. We’re hoping to take the first 26 Outlaw to the Baja Owners Club event in Knoxville (Tenn.) in July.”

The Liberty Associates boatbuilding group also has been busy with manufacturing Powerboat P1 USA, hybrid race boats. To date, company has built 12 of the single-outboard-engine models.

According to Walker, the company is still solidifying its dealer network. Most of the current dealers carry both Donzi and Pro-Line or Fountain and Pro-Line, rather than Donzi and Fountain, which are two competing brands. However, Walker says he wouldn’t totally rule out that possibility.

And what is Liberty Associates, the outfit that currently pays Walker’s salary, like to deal with? Walker said he could not be happier with his employers or more confident in them.

“I’m absolutely comfortable with the corporate structure and this organization,” he said. “They’re excellent people to work with. As part of Liberty’s board, I have a working firsthand knowledge of all the people involved. They are in for the long haul.

“Everybody (at Liberty) is anxiously awaiting for us to roll new boats out the door, but they’re realistic in their expectations and what the economy will do,” he added. “They’re not asking for something unrealistic. It’s really a good thing. It’s kind of refreshing.”