Your go-to source for performance boating.
HomeIn the NewsArt and Brit Lilly Team Up for OPA Season-Opener

When the green flag drops for the Super V Light class teams on Lake Hopatcong in New Jersey this coming weekend—the first event of the 2013 season for the Offshore Powerboat Association—the father-and-son team of driver Brit Lilly and throttleman Art Lilly, his famous offshore racing father, will be in the thick of it. In March, the 26-year-old Lilly bought a canopied 30-foot Extreme Super Light racer with a class-spec Mercury Racing 525EFI engine for competition this season. But the purchase came with a few conditions. 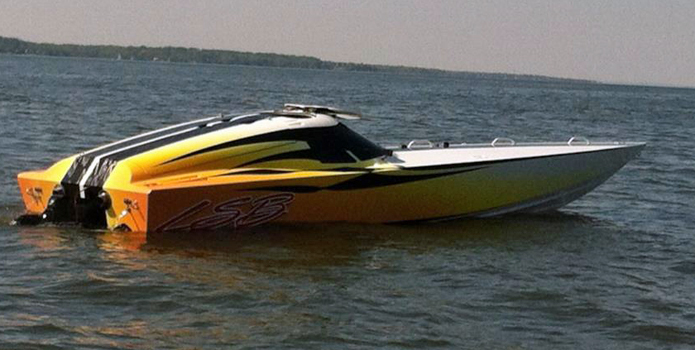 Art and Brit Lilly will campain this 30′ Extreme V-bottom next weekend in the first race of the OPA season.

“My mom said my dad had to go with me in the first race,” Brit Lilly said, then laughed.  “It was one of her rules for me getting the boat. There were a few of them. We’ve already broken most of them.”

The Lillys have teamed up in various offshore race boats four times in the past—and won all four races.

“It’s an experience you never forget, that’s for sure,” said Brit Lilly on racing with his famous 66-year-old father, who won more than 100 races including several world titles during his active offshore racing career. “I learn so much by running with him—he’s amazing at what he does. And it normally comes out good. I’d like to make this win No. 5, that’s for sure. It would be a great way to end.”

After the Hoptacong race, the plan is for Dan Hensley, who like Brit Lilly works at Lilly Sportboats in Severna, Md., to drive the boat for the balance of the season with the younger Lilly taking over the throttles.

As for Art Lilly, who still holds seven kilo records and remains one of the most respected offshore racers in the history of the sport, he said he’s thrilled to be racing with his son one more time.

“It’s like a dream come true, racing with your son,” he said. “We work well together, we get along and it’s pretty awesome. He is intense when it comes to this—he has spent more time and more effort on this boat than any of the other things we’ve been into like racing motorcycle and drag cars. He’s got the bug.”

Editor’s Note: Look for an event report on the OPA Lake Hoptacong event on speedonthewater.com next week.