Qatar Team driver and Florida native Shaun Torrente capped an exciting afternoon of racing on Qatar’s Doha Bay when he won for the first time in 14 career race starts in front of tens of thousands of jubilant race fans at the 10th Grand Prix of Qatar. 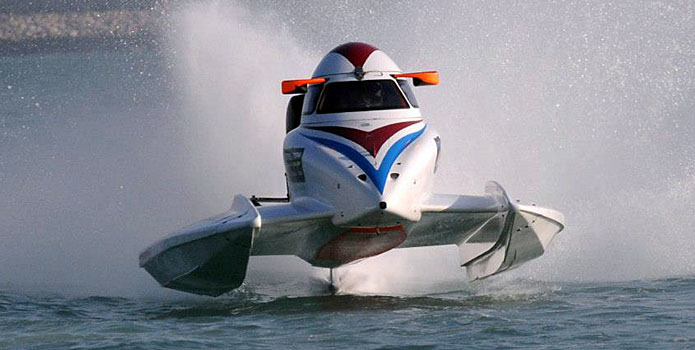 For most of the 38-lap event—the fourth round of the Union Internationale Motonautique F1 H2O World Championship—Torrente’s teammate Alex Carella was in clear control after starting from the pole. The teammates looked set for a spectacular 1-2 finish until the race came to a dramatic stop three laps from the end.

American driver Terry Rinker of Team Azerbaijan spectacularly barrel-rolled out of contention when he collided with Torrente on the final corner of the 35th lap. The spectacular crash forced a yellow flag situation, during which Carella ground to a halt with mechanical issues. The race finished under the yellow with Torrente leading from Sweden’s Jonas Andersson and France’s Phillipe Chiappe to bring home his first victory overseas and take the lead in the driver points standings.

“I am so excited about the win,” said Torrente, who was able to share the excitement with his wife, Flavia, and daughter, Isabella. “We’ve been working so hard, my crew and I, for the past two years and we’ve done everything but have good luck. Now, the luck has come to us and we are elated to win in front of my team’s hometown fans and at the same time move into first place in the championship.”

Most of the afternoon, Andersson of Team Azerbaijan was caught up in a great battle with Chiappe of the CTIC China Team as the two were slicing and dicing through traffic lap after lap fighting for the final podium position behind the Qatar Team duo. Chiappe would later get disqualified for technical reasons after the event and Andersson came home with second place, reaching the podium for just the second time in nine tries in Doha.

Youssef Al Rubayan of Kuwait, driving for F1 GC Atlantic, reached the podium for the first time in his career in only his 12th career start. Meanwhile, his teammate Duarte Benavente of Portugal ran a great race starting back in the 17th position and charging up to fourth at day’s end. Norway’s Marit Stromoy climbed from 18th on the grid to a career-tying-best fifth-place finish, while second-year pro Filip Roms also had a career best sixth after starting 16th for the Mad Croc Team.

Torrente, a two-time North American champion, is hoping he can carry the momentum into the fifth round of the F1 H2O World Championship in the United Arab Emirates (UAE) capital Abu Dhabi. Qualifying is set for Nov. 28 and the Grand Prix will be on Nov. 29. The final race of the season will be in Sharjah, UAE, two weeks later (Dec. 13). With the victory, Torrente leads the championship with 55 points, seven points ahead of his teammate Carella (48) and 11 points ahead of Sam Selio (44).

“The classic racing accident, which can happen in any form of marine sports, was a very exciting end to a race that both our Qatar drivers controlled from the start,” said Sheikh Hassan bin Jabor Al-Thani, president of the Qatar Marine Sports Federation. “The outcome also means we have a very exciting finish to the season in prospect in the UAE now at the last two races in Abu Dhabi and Sharjah.”