Gary Ballough, one of the most decorated offshore racers in American history, is in the midst of his fourth season racing in the Middle East with the competitive X-Cat Series, and he can’t contain his enthusiasm for the circuit. 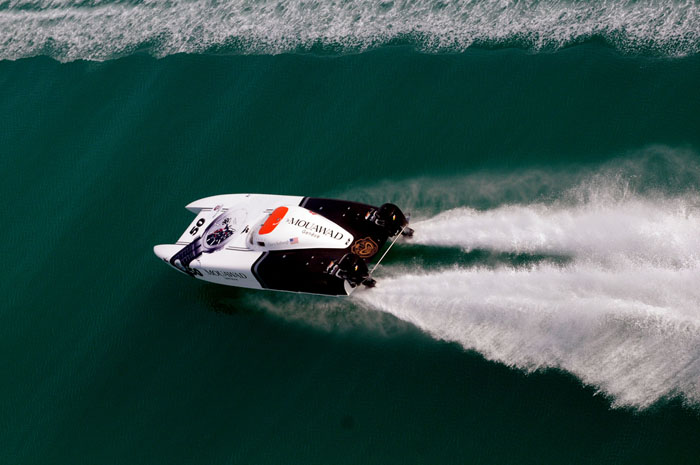 American throttleman Gary Ballough teams up with Swiss driver Omar Danial in Danial’s Mouawad catamaran in the X-Cat Series.“I love racing over there—the promoters run it very professionally,” said the Florida resident who hopped a flight to Dubai on Monday and will be racing alongside teammate Omar Danial from Switzerland in the series’ final two races over the next two weekends (April 7-8 and April 15-16). “The coolest and most alluring draw is that there are at least 14 boats and as many as 24—all X-Cat, no other class is involved. Now that’s racing.

“We’re talking the best teams from around the globe with eight different countries represented,” he continued. “Everyone there is so friendly, too. All of the teams help each other whether it’s a part, a tool, a motor or even a tow truck if you need it. I’ve met so many new racing friends.”

Ballough throttles Danial’s Doug Wright catamaran, which is sponsored by the high-end jewelry company Mouawad. The team currently sits in third place in the standings (behind Qatar Team and Fazza), but Ballough is hoping to make up some ground in the final two races.

“We really have had a great season so far,” he said. “We’ve finished third twice and second once. And we were in second during the last Dubai race that was stopped due to a photographer falling out and hanging under a helicopter. That second would have put us in first for the championship, but as they postponed the race, we are now in third.”

Last fall Ballough and Danial teamed up in Ballough’s Peters & May-sponsored Doug Wright hull to win the Superboat Stock class at the Key West World Championships in Florida. The title was Ballough’s 10th world championship. It was Danial’s third, although his first two came some 20 years ago while racing with Richie Powers in an Apache.

“This is my fourth year racing in X-Cat and I hope for many more,” added Ballough, who has a new 32-footer being built by Doug Wright that is expected to be finished in May. I actually got a tour of the plant from Wright on Monday, so look for a story and a couple of photos later this week on speedonthewater.com. Click here to read the related story: Doug Wright Preps Latest 32-Foot Cat.