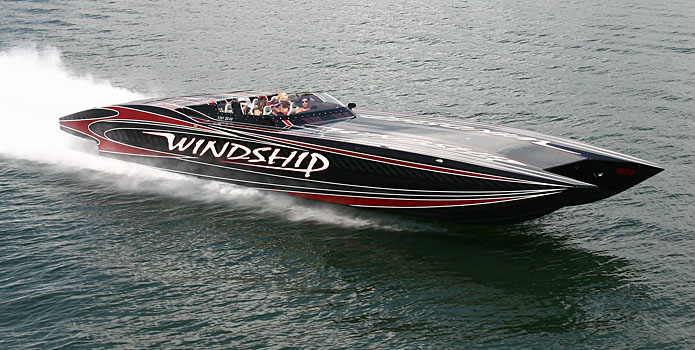 One of the driving forces behind the Pirates of Lanier Poker Run, John Woodruff ran his 48 MTI in the event, which raised more than $250,000 for local charities. All photos courtesy Jeff Girardi/FreezeFrameVideo.net

Have you ever heard of a poker run raising more than a quarter-million dollars for charity? Over the course of five or 10 years, maybe. But to raise that kind of money in one year? I know I’ve never heard of such a thing.

That’s exactly why I have to give a huge round of applause to the Lanier Partners of North Georgia (LPNG), who just last weekend raised more than $250,000 at the fifth annual Pirates of Lanier Poker Run at Lake Lanier Islands Resort in Buford, Ga.

Led by bighearted Georgia native John Woodruff, who owns the 48-foot Marine Technology Inc. (MTI) catamaran Windship, the LPNG board of directors rallied the troops and produced one of the largest and most beneficial poker runs this sport has ever seen. So what turned an event that raised just $5,000 in 2009 into the gigantic fundraiser it is today?

According to Woodruff, who deserves a lot of the credit for reaching out to his fellow poker runners and local contacts, the key was getting everyone on board with the event to understand the charitable side of things. And he’s not just talking about the participants—he’s referring to services and other aspects of the event production being donated to keep expenses to a minimum.

“All it takes really is that you care about what you’re doing and it comes from the heart,” said Woodruff, who used Windship as the pace boat for the fastest of the five groups at the start of the poker run, which benefits Camp Sunshine, Boys & Girls Club of Hall County and Naval Special Warfare Kids. “When I got involved with this run in 2011, I told the board we needed to set up a basic routine and keep it the same that way people know what to expect. What I’ve done since is taken what I’ve learned and enjoyed from all the poker runs I’ve gone to and applied those things to our event.”

The “routine” according to Woodruff is the welcome pizza party on Thursday, the cheeseburger raft-up party on Friday and the poker run on Saturday. He said all of the other elements can be modified or expanded upon if necessary. One thing that is a mainstay is the pirate theme as many of this year’s 282 registered participants, whether they were in a wakeboard boat, cruiser, pontoon or performance boat, dressed the part.

Woodruff said all three of the poker run winners donated their winnings back to the event, which is a tradition he hopes no one ever breaks. He also gave a lot of credit to two of his closest poker run friends for helping raise the bar at the 2013 event. The first was Dan Jape, who sits on the LPNG board and owns Reliable Heating and Air, the event’s presenting sponsor. Woodruff said Jape, who owns an Eliminator Boats 36 Speedster catamaran, gave the event 10 of his company’s billboards around town.

“Dan took down his billboards and put up Pirates of Lanier billboards in their place,” Woodruff added. “He also got us about $50,000 in radio ads and TV commercials—things only he could do because of his buying ability with the local media. For the first time ever we had spectator boats watching the start of the run. That’s all because we did a better job letting the community know what was coming to town.”

Woodruff then pointed to Kenny Armstrong, the Texas native who owns the 48-foot MTI Phantom. Armstrong was so touched by the charitable side of the event that he personally donated $50,000 toward the cause.

Although Jape was battling an illness throughout the festivities, he said he enjoyed everything about the event and wouldn’t have missed it for anything.

“For us to be able to raise money for these smaller organizations makes all the difference in the world to them,” said Jape, who did the run with his wife, Kim. “Not only did we raise a ton of money, everything went off without a hitch and the weather was great. I swear it’s been raining here for two months but the skies opened up and watched over the pirates. I have to give credit to John Woodruff, the entire board and the army of volunteers who pitched in—without them this event would not be possible.”

Jape said next year’s event will be scheduled on the same weekend (July 17-19), and he encourages anyone with a boat to attend.

Editor’s note: The photos in this story and all others from the event are available for purchase at FreezeFrameVideo.net.

Jay Nichols On The Long Road To Recovery