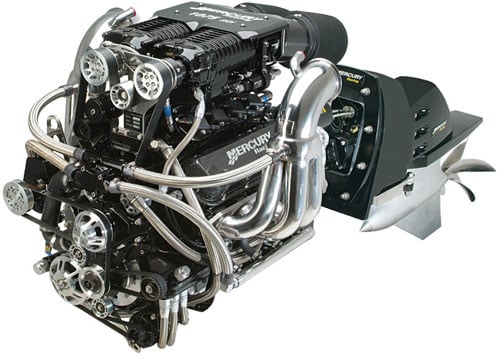 Introduced in the 2004, the Mercury Racing 1075SCi set the standard for high-performance pleasure boat engines.

By the time you read this, the very last new pair—and they almost always traveled in pairs—of Mercury Racing 1075SCi engines will be installed under the hatches of a 44-foot-long custom V-bottom from Outerlimits Performance Boats. I know this because Mike Fiore, principal of the Bristol, R.I., boat company told me, and I confirmed it with Fred Kiekhaefer, president of Mercury Racing, in Fond du Lac, Wisc.

That the supercharged 1075-hp engine has gone the way of Dolphin shorts and Members Only jackets is no surprise—Kiekhaefer announced the imminent demise of the model not long after the world-beating, quad-overhead cam, twin-turbocharged Mercury Racing 1350 was introduced in 2010 at the Miami International Boat Show. We all knew this day was coming.

And yet I have to admit I’m a little sad to see it go. Not because the 1075SCi hasn’t been replaced with something much better—it has—but because it was, at least in its day, every bit as groundbreaking as the 1350.