Trying to pick highlights from any running of the Miami International Boat Show is an exercise fraught with peril. OK, maybe that’s a bit dramatic but no matter how well you assemble your list you’re going to leave out something great—and then kick yourself when the story goes live.

The new collaboration between Cigarette and Mercedes-AMG looked amazing on the water in Miami. All photos courtesy Pete Boden/Shoot 2 Thrill Pix

Still, we’re up to the task. So here goes.

Cigarette Racing Team Steals The Show
From the Mercedes-AMG Project ONE supersports showcar to the spectacular 51-foot V-bottom it inspired to the massive yet elegant Cigarette dock display itself, the Opa-Locka, Fla., boat builder pretty much stole the show and delivered excitement.

Check out some of the highlights from the first day of the Miami International Boat Show.

The Passion Of Fred Ross
The owner of Iconic Marine Group—parent company of the Fountain, Donzi and Baja brands—and the Big Thunder Marine dealership slated to soon open in new showroom in Osage Beach, Mo., Fred Ross isn’t reviving the brands to get rich. He’s already rich, and not merely in terms of money in the bank. He’s rich in enthusiasm, passion and devotion to see the brands, as he told us today, “get back on top where they belong.” (Look for a complete interview with Ross in the upcoming January/February issue of Speed On The Water digital magazine.) 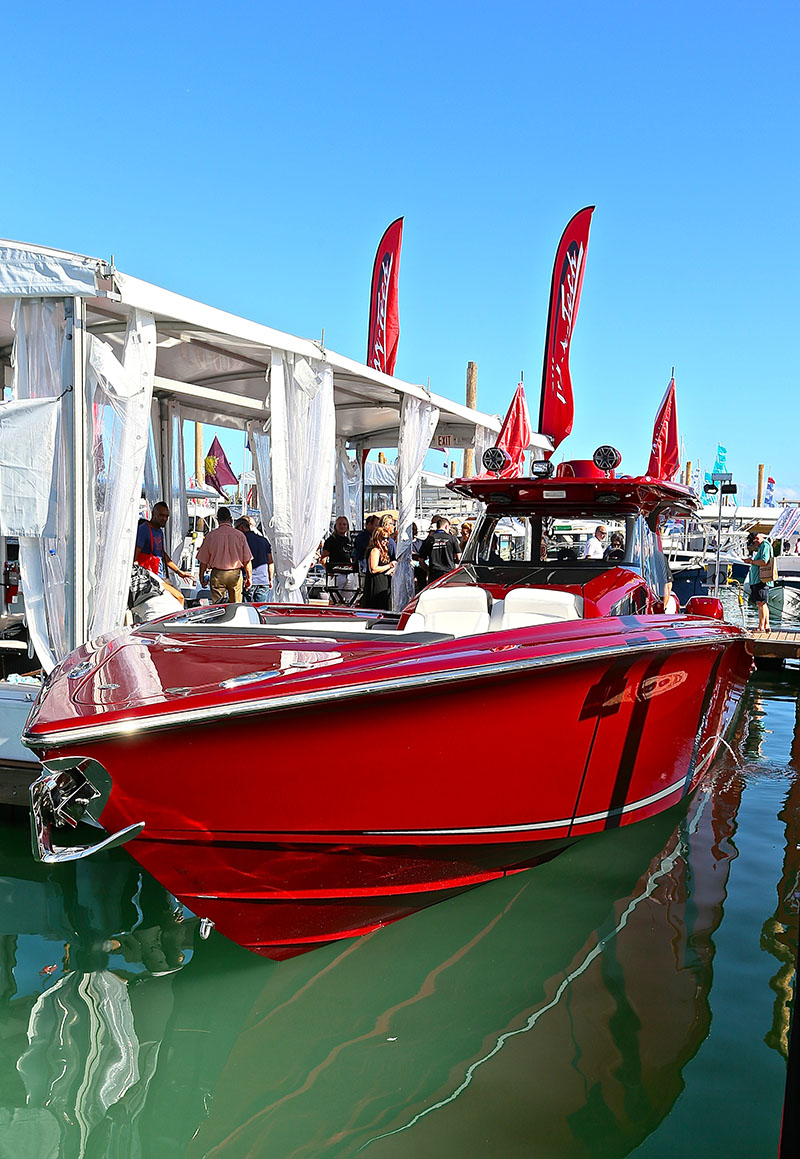 Nor-Tech’s Beautiful Burgundy 450
It’s no secret that we love Nor-Tech 450 Sport Center Console—we said as much in our profile of the boat in the September/October 2017 issue of our digital magazine (download it here). But we couldn’t take our eyes off the burgundy-hued 45-footer at the North Fort Myers, Fla., company’s docks (click image on the right to enlarge). It’s not just a beautiful Nor-Tech, it’s the most beautiful Nor-Tech we’ve ever seen.

Stiltsville As Seen From The Wright Performance 360 Catamaran
With our contributing technical editor Bob Teague, Performance Boat Center’s Myrick Coil and a potential buyer, we caught a ride to the unusual piling-supported community in the very first collaboration between Doug Wright Designs and the Osage Beach, Mo., powerboat dealership. Running 115 mph with ease—and plenty left in the sticks—getting there took no time at all. And for the same reason, we arrived back at the docks all too soon.

First Class With Benny
We’ve known Ben Robertson, Jr., since his tunnel-boat—and later offshore—racing days, and he’s always been a straight-talking class act. Nothing’s changed, and when we met up with him at the Fountain Powerboats dock display eager to discuss the company’s upcoming kilo boat, he told us he’d voluntary stepped out of the cockpit in the interest of preserving harmony. According to Reggie Fountain, Jr., Reggie Fountain, III, will run the boat with former Fountain man Jeff Harris.