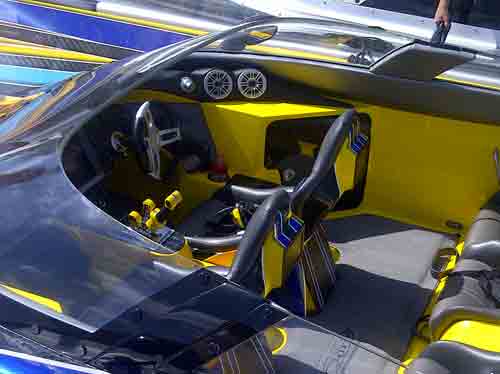 The cockpit of Pass Blocker, a 48-foot MTI catamaran owned by Brad Benson.

Once called the “Manufacturers Poker Run,” the 2012 Miami Boat Show Poker Run is living up to its former name. Stu Jones, the founder and owner of the Florida Powerboat Club, started the run as a showcase for high-performance hardware displayed at the annual Miami International Boat Show the week prior. And while the run has had as many as 100 boats and as few as 50 during the years—this year 70 boats are registered and approximately 40 have come down on today’s run—it never fails to disappoint in terms of go-fast catamaran and V-bottom eye-candy.

In front of me at Gilbert’s, the lunch stop for the run, is yet another outstanding fleet of the finest offerings in the high-performance world. Stand-out rides include Phantom, a 48-foot Marine Technology, Inc., catamaran with Mercury Racing 1350 engines, Pass Blocker, another 48 MTI with 1350s and the ever-popular Speed Racer, a 44-foot MTI, which I have the privilege of driving for the run with owner Bob Christie on the throttles. It may well be our swansong in the iconic catamaran, as it’s for sale through Pier 57. 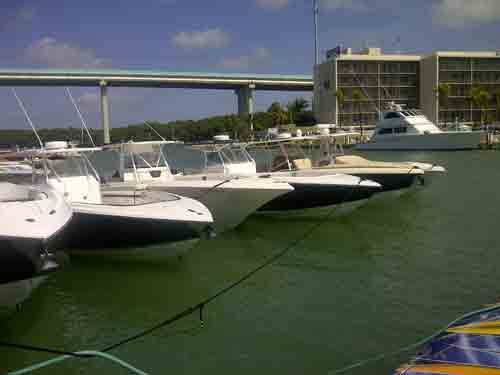 The center-console fleet is alive and well at the Miami Boat Show Poker Run.

Less sexy but every bit as impressive is the center-console contingent that includes the Statement Marine 368 SUV Crossover and the five-engine (350-hp Mercury Verado outboards) Cigarette 42 Huntress—both of which were major hits with attendees and buyers at the Miami show.

From here, we head to Islamorada and its recently renovated resort, which will serve as home base. Upcoming events include Saturday’s sandbar raft-off organized and sponsored by PowerboatNation.com.

Look for additional reports throughout the weekend.